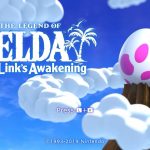 You are reading
The Legend of Zelda: Link’s Awakening Switch Review

Since 1986, The Legend of Zelda has become one of the most prominent names in video games. After the release of The Legend of Zelda: Breath of the Wild, the series has stepped into the open-world genre, evolving itself from the original formula. So, it was a nice surprise when Nintendo revealed a fan-favorite top-down classic coming to the handheld/console hybrid: The Legend of Zelda: Link’s Awakening fully remade. For some, it was the perfect nostalgia fix they wanted from past Zelda adventures. For others, like myself, it was a chance to experience what made the original set of games so great and why they’re so renowned. After playing through the Link’s Awakening remake on Switch, I finally understand. 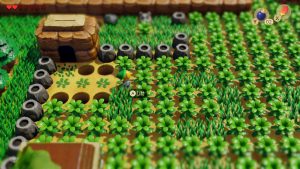 In The Legend of Zelda: Link’s Awakening, Link finds himself on the tropical shores of Koholint Island after being shipwrecked. Marin, the island’s local songstress, finds Link and brings him to her home. Link is then informed that in order to escape the island, he must gather and use the eight mystical instruments to play a melody for the Wind Fish encased in a giant egg at the top of a mountain. From there, our new adventure begins to collect the eight instruments and uncover the secrets of Koholint Island. I loved how even a nonsensical, but hilarious trading quest fleshed out some characters on the island. Some events even tied itself back to the main narrative. While the tale is simple at face value, Link’s Awakening‘s story gets surprisingly deep and moving. 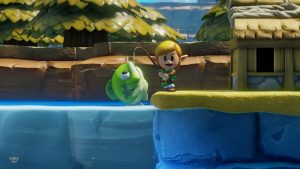 The town of Mabe Village on Koholint Island has a fishing mini-game. Go fishing to collect some rupees!

After completing Link’s Awakening, I noticed that the game omitted a few of the series’ staples. There’s no Zelda, no Ganon, no mention of the Triforce. These trademarks, besides Link, were beloved characteristics to a Zelda game. It’s the equivalent to a Final Fantasy game having no ethereal crystal tied to its existence or those cute yellow horse-chickens called Chocobos. And yet, this change totally worked. It felt like playing through a delightful side story in the Zelda mythos featuring Link and those tied to Koholint Island.

This change seems to be the only difference in the formula, however, since the addicting gameplay loop and familiar, whimsical quirkiness are very much present. While playing, I kept relating Link’s Awakening to one of my favorite Metroidvania games, Hollow Knight, for one similarity. No, not for its difficulty. Rather, both games deliver a captivating experience of exploration and progression, one that you will have no problem sinking a full weekend into.

In Link’s Awakening, every puzzle and dungeon led to unlocking a new area or that elusive treasure you came across before but couldn’t open. Even when I had to, I never wanted to stop playing because of my curiosity to see new things kept me hooked. It’s the gameplay loop of curiosity, discovery, reward, repeat that makes Link’s Awakening a joy to play. As a first time player, I’m unaware of the major changes made to this glow-up rerelease other than quality-of-life tweaks, but the game design is absolutely fantastic. It makes it even more impressive if little changes were made, cementing Nintendo’s talent for making great video games. 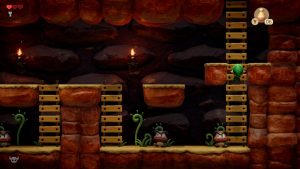 Another highlight is the dungeons and their boss encounters. From the start, it was not a surprise to finish dungeons in one sitting as exploration and puzzle-solving went hand-in-hand. I really appreciated the helpful sound cues that distinguished which rooms to really pay attention to in order to progress. It made 100% runs, for the most part, doable the first time through. While the boss fights still revolve around the ‘hit a certain spot to win’ strategy, they were layered with creativity and an identity that kept each special and satisfying to complete.

The enemy designs are your typical fantasy villains: trolls, bats, slow snake-blobs, a giant bird, and even a Goomba from the Super Mario games thrown in for chuckles. Each of these compliments the gorgeous overworld and aesthetic theme of Link’s Awakening. Along with the enemies, each area was distinctive and full of character expressed either through the game’s cute art style or its beautiful music. I was particularly impressed with the heart-racing battle themes as well as the dungeon themes that played perfectly in the ambiance and character of the dungeons.

While the game’s landmarks are appealing, the constant backtracking can get a bit tiresome even with the ability to fast travel later on. I found myself begrudgingly traveling the same paths multiple times realizing that I should have memorized its confusing roads sooner. The same can be said for dungeons, especially when one puzzle involving multiple rooms are thrown in. Having a map and map markers on hand are meant to be helpful, yet the more complex a dungeon became, the less I relied on the too-simple map design. Without an indication of which stair set leads to the other, I ended up wasting time going to a location I didn’t need to. All of this wraps up into the later dungeons being a tad drawn out.

To add to this, it’s disappointing to see the game have inconsistent framerate issues. We know the Switch can provide a smoother experience for a game like Link’s Awakening, so why doesn’t it? That’s not to say the choppy framerate ruined my overall experience. Far from it, in fact. However, it was definitely a distraction early in the game and something you wouldn’t expect from a flagship title from Nintendo. 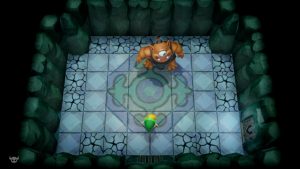 Chamber Dungeons Mode Is A Simple Blueprint For A Grand Idea

A new feature to the remake is Chamber Dungeons, an interesting take on Mario Maker games but with the Zelda DNA. Chamber Dungeons will have the player creating dungeons room by room with a set of intricate rules to follow to make a dungeon playable. You’ll be able to mix and match different styles of rooms from the main campaign, allowing for some creativity. All in all, it’s a simple blueprint for what could become a future Zelda Maker title, but I’m not personally invested to make the best dungeon ever.

At the time of this review, there is no proper online sharing functionality to Chamber Dungeons other than using the amiibo feature. Since I don’t own an amiibo, I wasn’t able to see if Chamber Dungeons has any dungeon-sharing capabilities. So, it looks like any dungeons I create can only be played by others on my Switch as of right now. While it is a bummer that I can’t download player-created dungeons, it doesn’t take away from what the game already offers.

The Legend of Zelda: Link’s Awakening is a gorgeous remake of a game many revere as their favorite Zelda game. As my first top-down Zelda experience, I came out of it surprised, delighted and wondered how I never played the original version before. It’s a must-own for any Switch owner. Sometimes the best measurement of how great a game is can relate to how many times you’re willing to play it. With Link’s Awakening, I’m looking forward to another trip to Koholint Island very soon. 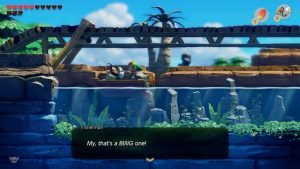 9
The top-down classic holds up to today's standards