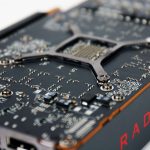 Reports indicate that AMD is planning to release its RX 5600 XT graphics card early next year. The GPU will likely compete with Nvidia’s GTX 1660 series. Both these cards are considered medium-spec GPUs. The  RX 5600 XT is considered a medium-end graphics card. The RX 5600 XT finds itself between the Radeon RX 5700 and RX 5500 series GPUs.

According to Videocardz, the 5600 XT will ship with at least two of AMD’s Radeon Add-In-Board (AIB) partners, offering 6GB of GDDR6 memory. This suggests that the company is making use of a 192-bit memory bus, matching the memory bus size of Nvidia’s GTX 1660 series.

AMD Steps Up its GPUs Line-Up

It is still not clear whether or not AMD plans to release a Radeon RX 5800 or RX 5900 series of GPUs in 2020. The company will likely position their RX series graphics cards to compete with Nvidia’s RTX 2080 series. which includes the RTX 2080 and RTX 2080 Ti graphics cards. Nvidia boasts the RTX line with its ray-tracing capabilities as its marquee feature. AMD’s intentions will be clear once it sets a pricing strategy of their higher-end Radeon RX series graphics cards, as it looks to compete with Nvidia.

Recently, a report indicated that European sentiments began favoring AMD CPUs over Intel. However, these positive perceptions have not correlated to AMD’s graphics cards. Time will tell how consumers react to AMD’s GPU line in the future.