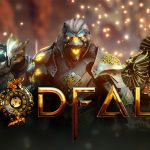 You are reading
Godfall is the First PS5 Launch Title

The PS5 has its first confirmed game: Godfall. It was announced at The Game Awards with a reveal trailer that showed a taste of the game. This trailer showed multiple armored soldiers fighting monsters and getting ready to scale an ominous tower. The game is developed by Counterplay Games and published by Gearbox Publishing. After the trailer, Geoff interviewed developers from Counterplay. These developers described the game as a “looter-slasher.” In the game, players will fight enemies who will drop loot, which is a similar vein to Gearbox’s best know franchise, Borderlands. Further, GodFall will be both single and multiplayer, again in the same vein as Borderlands. Godfall’s release date is Holiday 2020.