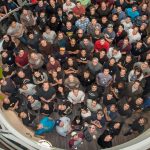 The games we love don’t appear out of nowhere. They have to be dreamed, molded, written, designed, drawn, and programmed. Games can be the passion project of a single person or a collaborative effort between hundreds of people across the world. Games can be single release prestige efforts or ongoing for months or years. Out of all the categories this year, this was the one that was decided by the largest margin, a virtual landslide. Therefore, this category is our way of saying thanks to the many hardworking men, women, and non-binary creators in the industry that make the worlds we love to be in. These are our 2019 Developers of the Year.

Respawn went above and beyond the expectations in 2019. From the stealth release of Apex Legends to blowing every Star Wars fan’s expectations with Jedi: Fallen Order, Respawn came in full force. On one end, they delivered a high-quality multiplayer experience complete with community engagement and updates. On the other side, Respawn fulfilled the promise of a rich single-player Star Wars game fans have been craving for. Their commitment to quality story-telling, fun gameplay and providing unique experiences is surely taking gaming to the next level. This continued commitment and delivery of excellence is why Respawn was the clear victor in our 2019 Developer of the Year category.

Fortnite didn’t debut in 2019, in fact it can be argued that 2019 wasn’t even Fortnite‘s best year. It was, however a year in which they maintained a seemingly impossible level of momentum. They debuted live event after live event which culminated in this week’s partnership with Star Wars. Even though, Epic launched its game’s store at the end of last year, but by signing exclusive partnerships with developers and reducing the cut they kept as part of transactions, they cemented themselves as a legitimate competitor to Steam. Epic’s greatest feat, however, was keeping hundreds of thousands of players watching nothing. Over the summer, the Fortnite island was swallowed by a black hole.  For two days every streaming service around was consumed with the question: when will it be back? Epic made patches a part of the in-game lore, and that’s a pretty amazing feat for any developer.

Runner Up: From Software

For the third time in a decade, From Software has reinvented itself. It began in 2009 with Demon’s Souls, then in 2015 with Bloodborne, and now with Sekiro: Shadows Die Twice. Yes, the gameplay loop is fundamentally the same. Though the manner in which you achieve your goals has changed so dramatically in Sekiro, that it’s like comparing The Witness to Doom because they are both first-person. By making traversal a combat technique and focusing heavily on a precision counter-based system Sekiro takes the formula in a bold new direction. It would have been easy to keep milking their hit franchise, Dark Souls. Instead, they left the Dark Ages behind in favor of a gorgeous Edo-era Japan. Sekiro is a fine-tuned machine that works perfectly every second you’re playing it. From Software more than deserve their runner up place in Lords of Gaming’s 2019 Developer of the Year.