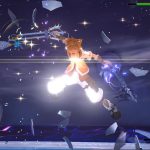 A number of screenshots have been released detailing the content coming to Re Mind, Kingdom Hearts III‘s DLC set to release this week.

UPDATE: The Japanese Twitter account for Kingdom Hearts III posted a message revealing more information on the upcoming Re Mind DLC. Take the next bit of news with a grain of salt since the Google language translation software isn’t particularly accurate.

Below, the tweet roughly translates to “‘KHIII Re MIND’ release commemoration ‘7 lights and 13 darkness Q & A’ ‘Hikari’ released!” Thanks to fansite KHInsider, the translated Q&A featuring Co Director Tai Yasue gives a more specific idea of what’s being added to the free 1.07 patch. Along with the Oblivion and Oathkeeper keyblades, six combo abilities are being added, sharing restrictions have been lifted, and some cutscenes have have been fixed, according to KHInsider. The answer did not specify which scene or what the abilities were, but this at least answers the vague “main story update” tag used before.

The text goes on to explain more about the Premium Menu feature Square Enix JP calls “Black Code” and “Fast Passcode.” The latter can be considered as a super easy mode fit with auto blocking and other auto functions.

The sixth and seventh questions in the Q&A refer to the extra bosses included in Re Mind. The answers confirm Master Xehanort and Xion as boss battles, and the secret boss was requested to be “strong enough to cry.” In other words, it seems like Nomura is fed up of hearing Kingdom Hearts is too easy.

The fully translated Q&A can be read on KHInsider.

ORIGINAL: On the game’s officials Japanese website, a batch of images show the new features coming to Kingdom Hearts III Re Mind other than the additional story chapter. One of them happens to be a ‘Premium Menu’ that will allow players to customize the game’s difficulty. In it, players can completely turn off/on Shotlocks, Team Attacks, the ability to cure, and more. According to Kingdom Hearts fansite KH13, Director Tetsuya Nomura said the Premium Menu cannot be accessed at any given time during a playthrough. It also looks like an in-game ranking is being added to those who complete the game with specific restrictions. Replay value! 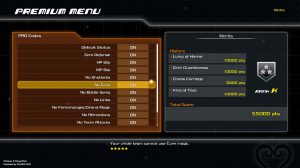 Other images show Riku and Roxas as playable characters in certain scenarios of Kingdom Hearts III. It has been confirmed that fans can also play as Aqua and Kairi. According to KH13, thirteen boss battles will be added as well. No word yet on if players can choose any character other than Sora to fight the new roster of bosses.

The news releases focused on the ‘Data Greeting’ and ‘Slideshow’ features that expand the game’s photo-centric nature. In ‘Data Greeting,’ players are able to choose locations to fill objects and characters with for unique screenshots. These images can then be added to the in-game ‘Slideshow,’ which is said to come packed with frames and background music. You can see previews of both modes below:

A pair of screenshots show off Sora using the the newly announced ‘Double Form.’ The second image shows him dual-wielding the Oathkeeper and Oblivion keyblades. This will be the first time Kingdom Hearts III has a dual-wielding keyblade form. Both keyblades were initially announced with their own separate forms.

Per Re Mind‘s official story synopsis:

Re Mind – the other tale that unfolded during the climax of KINGDOM HEARTS III. Determined to rescue Kairi, Sora travels to the Keyblade Graveyard a short time before the final battle was to take place. Lacking a corporeal form, he traces the hearts of the seven guardians of light. Through experiencing their personal battles firsthand, Sora is about to discover truths that he has never before imagined.

Kingdom Hearts III Re Mind releases on January 23 on PlayStation 4 and Xbox One on February 25.

The Lord’s Word: I’ve been holding out to replay KH3 for the Re Mind update for quite a while. Patch 1.07 was given more clarification, specifically mentioning a cutscene was modified and six abilities have been added. Members of the KH community have complained about KH3’s combat, so hopefully the new abilities can quell their criticisms. The revision worked for previous Kingdom Hearts, after all.