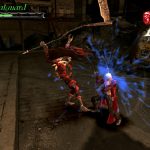 Producer of Devil May Cry 3 Special Edition Matt Walker announced on Twitter one of the game’s exclusive features is coming to the Nintendo Switch.

A long-awaited feature is coming to Devil May Cry 3 on Switch – style switching. When the game initially launched in 2005, it introduced the Style System. Players to choose between six different fight styles – Trickster, Royal Guard, Gunslinger, Swordmaster, Doppelganger, and Quicksilver. However, switching between either was not possible mid-level, let alone mid-combos. It wasn’t until Devil May Cry 4 where players were able to switch between Dante’s varied fighting styles on the fly. From it, players created complex and extremely flashy combos. They’re always impressive and fun to see from the DMC community.

Now, fans will be able to create those intricate combos in one of the series’ most celebrated games. Producer Matt Walker explains in the video below:

Capcom will be hosting a live stream on January 16 at 2 pm PST showing off the dynamic gameplay feature.

Devil May Cry 3 Special Edition releases February 20 as a digital download on Nintendo Switch. Nintendo is offering a 50% discount on the first two DMC games if you pre-order DMC3 Special Edition.

The Lord’s Word: Fans of the series have been waiting for this update for a long time, especially after DMC4 and the overwhelming success of Devil May Cry 5. Devil May Cry has always been about flashy and creative action gameplay, so why not add style switching to, what is argued, as the best game in the series? With this new feature, I may just be able to finish DMC3.