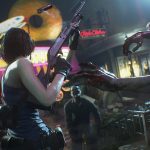 You are reading
Nemesis Roars in New Resident Evil 3 Trailer

Capcom has released the latest trailer for the upcoming Resident Evil 3, scheduled to release on April 3, 2020. The new trailer highlights the game’s main antagonist, Nemesis.

As evident in the trailer, redesigns for fan-favorite characters Jill Valentine and Nemesis can be seen in greater detail. Gamers will have more to fear as Nemesis appears to be wielding a flamethrower:

Capcom’s official description for the Resident Evil 3 trailer was released: “Get to know more about the heroes, villains, and the overpowering Nemesis of Resident Evil 3 in our latest #RE3 info drop.”

Back in December, cover art for RE3 leaked online before an official announcement. During PlayStation’s State of Play show, Capcom confirmed the sequel as well as it being paired with Resident Evil: Resistance, a 1v4 multiplayer mode.

Reported by IGN, producers of the game Peter Fabiano and Masachika Kawata say work for the remake “is 90% completed.” In a separate interview, the developers claim the sequel will see more changes than Resident Evil 2′s remake including a more compelling cast.

Resident Evil 3 launches with a collector’s edition for North America that includes:

Those who pre-order the game will also receive the exclusive Classic Costume Pack that features the original design for Jill Valentine and hairstyle for Carlos Oliveira. RE3 will release on April 3, 2020, for PlayStation 4, Xbox One, and PC.

The Lord’s Word: Paraphrasing The Walking Dead’s Negan character, “Yep, it’s gonna be pee pee pants city here real soon.” If there was a monster to fear, it was Nemesis. RE3 remake is giving the same terrifying baddie a flame thrower. So, y’all better run. And fast.