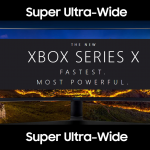 Microsoft has been pretty active in supporting PC monitors on the Xbox One and Xbox One X this generation. The Xbox One currently supports FreeSync, 120Hz refresh rate, and 1440p resolution, with ultrawide monitor support appearing to be on the way. PCGamesN reports they have been in contact with Samsung representatives who are in talks with Microsoft’s Xbox team on ultrawide monitor support. It might be a bit too late to implement this on current-gen Xbox consoles but it should be possible on the Xbox Series X.

“…. “We’re pushing, we’re talking,” a Samsung rep tells PCGamesN in regards to Microsoft Xbox ultrawide support…….  Ultrawide support may come too late in the day for the Xbox One, but with the Xbox Series X set to launch later this year, it could be yet another feature familiar to PC gamers that’s on the roster for next-gen consoles.”

What’s interesting is that Microsoft did work with Samsung on ultrawide monitor support in the past but it has never been fully implemented to this point.

“….Samsung also tells us that it’s worked with Microsoft in the past to implement ultrawide gaming on an ad hoc basis. However, the functionality has never seen the light of day in a public release…..   “

Considering that Microsoft supports a number of PC features on current-generation Xbox One consoles, I wouldn’t be surprised if Microsoft does indeed add ultrawide monitor support for the next-gen Xbox Series X.