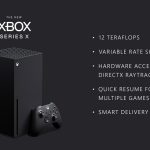 You are reading
New Information Released For Xbox Series X

Xbox decided to casually release an article talking more in-depth about the Xbox Series X. A lot of this information was a rumor at first, but now we have solid and concrete information about what the Xbox Series X aims to do. Head of Xbox Phil Spencer released an article today through Xbox Wire talking extensively about the new next-gen console they are working on. Needless to say, it is quite a substantial step up from what the Xbox One family of devices are capable of.

There are quite a few things that will be a fantastic addition to technology for Xbox gamers. This new information seems to give light that they are trying to make sure it is as powerful as possible for developers and gamers both. Variable Rate Shading alone could substantially help increase graphics for games.