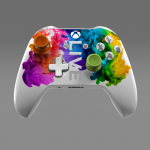 This is an exciting time right now for gamers. Next-generation consoles are right around the corner! With that comes new and exciting tech, games and visuals. With HDR playing such a large role in bringing a beautiful and colorful presentation to games, it is only fitting that there should be more ways to present and show off this wonderful feature. A good way to do this would be the startup screen. Xbox has been constantly working on and experimenting with the Xbox dashboard and UI for years now. Much of what they did has not worked out very well, unfortunately, but recently with the new design, it has become much better. They shouldn’t stop there though!

With the Xbox Series X coming it is only fitting to design something new and more “grandeur”. If you observe the gaming crowd on Twitter, you will see someone that puts out some fantastic custom Xbox fan art designs. That guy goes by the name of “Xbox Pope.” He works as a professional graphics designer and recently worked in cooperation with Xbox to create a new, exclusive controller. This controller was made only for the Xbox Live team, and it is gorgeous!

yes the @XboxPope has secretly working with @xbox on a controller design for the staff of #XboxLive thanks to @McDanRandom & @JaseHast its been a wonderful journey @XboxP3 you have a truly wonderful team i have been very lucky to finally be a part of https://t.co/uGyBtiqClG pic.twitter.com/MXxuZBBvtN

A limited edition @xbox controller designed by myself for all the #XboxLive team to say thank you for there amazing work https://t.co/45zU12deUx

Let’s pay attention to the second tweet. A member of the Xbox Live team is holding that angelic controller in front of a beautiful Xbox wallpaper. It looks like it was made just for the controller reveal, as a concept for the colors. I had to go out on a limb and ask about the wallpaper though because it is just too beautiful to not have available to the public. 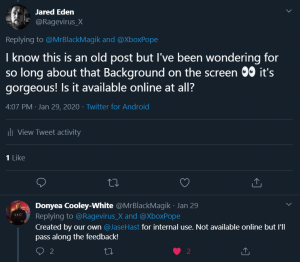 Unfortunately, it’s internal use only. Maybe we will see it in the future and I really hope we do. Now with the Xbox Series X coming soon, team Xbox should showcase off its capabilities. That wallpaper design itself would be of great benefit to them for showcasing. The Xbox startup screen has always been nice, clean and simple, but they should change that this time around. Here is an idea I had for utilizing a similar type of art design for the startup screen.

A white screen quickly dims in from dark to bright. The Xbox symbol, looking like polished titanium drops in at the top of the screen as if dropping into a tank of water. The sound of the symbol hitting water and a small chime precede a crescendoing orchestra recreating the Xbox startup sound. As the symbol falls to the center of the screen and floats into place, splashes of color arrive on the screen from multiple different directions. Each time you turn on the Xbox Series X, the splashes of color come from different directions and are different colors. As everything on the screen appears in place, the orchestra tapers out and the home menu appears.

The startup screen is a prelude to the actual home screen. There is no transition to something different, this is it. Game icons appear just below the Xbox symbol that is just above the center of the screen, but not in their usual boxed art style. The game images are cutouts, showing only what the game cover image is with no additional background. You move them along in a Netflix style fashion, scrolling through to see what game you want to play. Every time you move to an icon though on the home screen, the splashes of color in the background move a little bit. Move your icons enough, you will rotate out the colors for something different.

Xbox could go in many different directions in regards to their UI and startup screen design. Hopefully, they will go with something bolder this time. Show off what the Xbox Series X can do. The color splashes would be a great way to showcase HDR capabilities and pixel rendering. In addition to the orchestra music, it would be a good way to showcase 3D/Dolby Atmos audio. One can only wish that Xbox would go with such a creative route. Doing so would be a good way to stand out more from the competition. PlayStation already has a good UI design but boasts having dynamic themes. Moving backgrounds that bring the experience for the console to another level. If Xbox can figure out how to do something similar yet unique, it could draw in more people and please the fans.