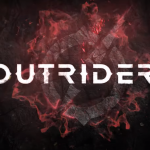 People Can Fly, the studio behind Gears of War: Judgement and Bulletstorm, has begun peeling back the veil on their latest title, Outriders. The Polish studio is partnering with Square Enix as the publisher and will pair with Avengers and FFVII Remake for a pretty incredible 2020 fiscal year.

The reveal trailer shows a cooperative FPS in a lush alien setting. The story takes place after the ravishing of Earth with colonists setting out for a fresh start on Enoch. An anomaly has changed the human refugees and granted them powers akin to a Destiny-style Guardian. The narration indicates some exploration of themes about the toll this new power is taking on the humanity of its hosts. However, how much of this is a loot and shoot game versus story-based adventure is unknown. The style looks something akin to Borderlands through a Devil May Cry filter. Gunplay against fauna as well as enemy combatants showed off some impressive blood and gore tech. This should come as no surprise given the pedigree of the developer.  You can see the full trailer below.

Outriders is the first game to be announced for all current and next-generation consoles as well as PC. The game will have its official reveal on Twitch tomorrow at 12 pm Pacific.