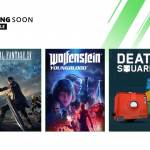 Its a brand new month, which means new games will be coming to Xbox and PC Game Pass. The Xbox Game Pass Twitter account has been hyping up February for quite a while, so it will be interesting to see what all the games will be for the entire month. Today, we learned that 3 new games will be coming to Xbox Game Pass. These games are Final Fantasy XV, Wolfenstein Youngblood, and Death Squared. PC Game Pass will also be receiving Final Fantasy XV and Wolfenstein Youngblood but will get Death’s Gambit instead of Death Squared. Here are the official dates that these games will be added to the service.

The official Xbox Game Pass Twitter account hinted that they will be announcing more games for this month very soon. As they teased that this will be one of the biggest months for the service ever, it will be interesting to see what games might make an appearance.

What games will you be playing out of this list? Let us know in the comments and don’t forget to check back for the latest gaming news and information.