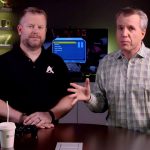 If you are a follower of Xbox, you are probably familiar with Bill Stillwell. He was the head of the Xbox backward compatibility initiative. That brought over 100’s of Xbox 360 Games and dozens of Original Xbox games to Xbox One. He then moved on to guiding the Project Xcloud team which is having a very successful roll out worldwide in its early stages. However, it seems that Bill has set his sights on even higher goals. He announced earlier this week that he would be leaving the Xbox team and that he cherished his time with the teams that he had worked with. Many rumors circulated that perhaps he could be going to Blizzard due to the recent departures of Rod Fergusson and Mike Ybarra. However, today Bill took to Twitter to clarify what the next step would be for him. He will be joining Microsofts Hololens team, to push forward their mixed reality initiative. He stated in a follow-up tweet that “I will always bleed green, but I believe Mixed Reality is on the cusp of breaking through to the masses, and I didn’t want to miss out on a chance to help drive this forward.”

Cat's out of the bag…

Moving over to the team that makes HoloLens! Going to focus on producing world class consumer AR/VR experiences in the MS ecosystem

I start on the team next week, but have been immersed in this for a while now.

There is no doubt with his impressive resume and talent that Microsofts Hololens team has just gained a very valuable resource. It will be very interesting to watch how this will shape the Hololens division going forward. We here at LOGnet wish Bill Stillwell all the best in his new role!

In case you want to learn more about Bill Stillwell’s new role, you can tune in to the Iron Lords Podcast tomorrow at 1pm EST. Stillwell will be talking about the latest gaming news and industry news with the Lords.

Check out the link here for the show.

Facebook Twitter Google+ LinkedIn Pinterest Tumblr
Previous article Bravely Default II's Demo Is Great, But Has A Few Issues
Next article HP VR Next Generation Headset Is On The Horizon