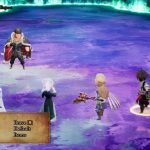 You are reading
Bravely Default II’s Demo Is Great, But Has A Few Issues

On March 26, Nintendo released a demo for Bravely Default II, the standalone game in the Bravely series. 2014’s Bravely Default brought the classic JRPG DNA into the modern era with a fresh take on turn-based gameplay. After putting three and a half hours into its demo, Bravely Default II has no problem carrying that sacred torch. While I noted a few problems during my time, BDII feels like the next proper step for the series.

From the jump, the demo lets players know that its story is separate from the main game. So for those worried about story spoilers, you’re good. It’s here where we get a snippet of story and a small introduction to our four main characters: Seth, Gloria, Adelle, and Elvis. Each character has clear personality distinctions, like Gloria’s persistent nature or Elvis’ laid back demeanor. They also echo some personality traits from the protagonists of Bravely Default. Elvis is a bit of flirt, like Ringabel. Adelle is snarky and confident, like Edea. By no means am I saying this is bad, but it is something I couldn’t help but notice. 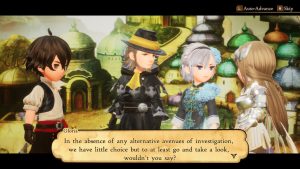 In order from left to right: Seth, Elvis, Adelle, Gloria

To make their personalities a little more unique, I would like to see character notes in the Bestiary journal make a return. Featured in Bravely Second, each time the party learned more about an enemy, they jotted down tips and opinions about that enemy. This brought a whole new level of characterization, storytelling, and world-building that I loved. I hope it’s something the developers are considering including in Bravely Default II.

As for the visual style, it’s definitively a big upgrade for the series. Character models in battles could look cleaner, but everything else is gorgeous. Savalon, a city located in the desert region, is a vibrant and beautiful painting that came to life. It’s truly the next-level enhancement to the series’ signature art style. Remember how changing jobs altered a character’s appearance? That feature makes a return and Square upped the ante on fashion. Take a look: 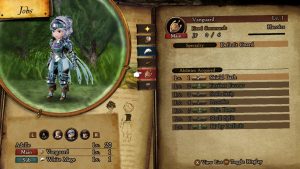 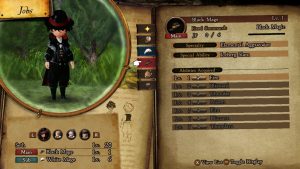 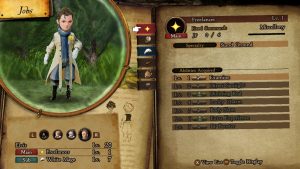 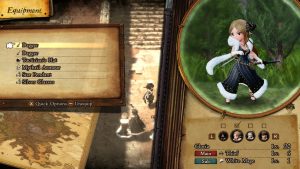 Now for the meat of this demo: the gameplay. Bravely Default II does inherit the turn-stacking battle system from previous games. Before diving in, the demo lets players know it was specifically designed to get them used to the mechanics. This is also the first Bravely game to come to Switch, which could explain why the gameplay is initially barebones. 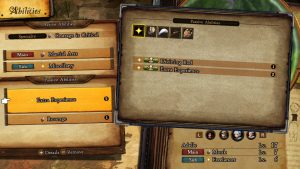 In Bravely Default II, you can assign a main job and a sub job to a character. Equipping a sub job unlocks the active abilities of that job, allowing to mix and match initial one-sided roles. I’m a player that loves options and rarely stays consistent with one strategy. So having a Monk that can also heal or a Freelancer that can also steal items leads to a plethora of cool setups.

The Brave-Default battle system mixed in with the diverse set of strategies from jobs is still a stupid amount of fun. Ever had those gaming moments where you completely lost track of time? The Bravely games do this for me every time I hunker down and grind out abilities from jobs. I love finding the right set of attacks to pour all of my turns into and 1-turn wipe enemies. 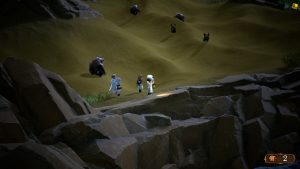 While the battle system is familiar, the demo introduces a few new changes to the gameplay experience. For one, open-world exploration is vast. The desert area I explored is bigger than I anticipated, which immediately had me notice something else: no more random encounters. That’s right, enemies can now be seen roaming around the overworld with you. When fighting in BDII, characters initiate their actions immediately after you tell them to. In previous games, you were able to plan out all four members’ plan of attack, then see it play out. I’m not sure if I like one or the other more, but it did throw me off at first.

What Can Be Improved

In battle, the ‘fast-forward’ and ‘repeating your last move’ quality of life features are a welcome return. However, using fast-forward makes the character’s actions look janky and rough. There are some framerate hitches I noticed more than a couple of times due to the number of enemies onscreen. While these can be easily fixed before launch, it was disappointing to see that lack of refinement, even for a demo.

Also, is there any reason why Default isn’t mapped to the L button even though Brave is mapped to the R button? This button layout was present in previous games, so I was confused as to why it wasn’t in the demo. Lastly, I would like to see an experience, jobs points, and money booster similar to previous games in BDII. In Bravely Second, those boosters activated after 1-turn wiping enemies consistently, which made grinding levels and jobs a lot less time-consuming. On the same point, the developers should add the Auto Battle feature to make grinding as streamline as possible.

I finished the Bravely Default II demo feeling even more excited than I was when it was first announced. While there are some hiccups, I’m not all that worried. With a release window of 2020, I hope the developers give attention to those finer gameplay details and quality to make the game play flawlessly. Revo is making a comeback for the game’s music, and yes, it’s already incredible. Now, that I was briefly introduced to the new cast and world, I’m looking forward to unlocking its secrets.