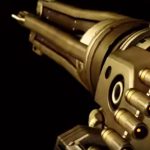 You are reading
Heir Apparent, Destiny’s New Exotic Has Leaked

Destiny players may not even have finished the quest for the Fourth Horsemen. However, they already have something to look forwards to. Destiny’s new exotic, a machine gun called Heir Apparent has been uncovered by dataminers. While we don’t know the circumstances behind its reveal, noted Destiny dataminer JpDeathBlade  has staked a claim on its arrival as May 5, or week 9 of the current season.

This machine gun was seen in the trailer for Season of the Worthy. Most notable is its unique perk, Armor of the Colossus. This provides an arc shield when the weapon is spun up. The gun is clearly the heavy machine gun used by the Cabal Colossus. As such, it wouldn’t be out of the question for the quest to acquire it to tie into the season long narrative. The culmination of the Heir Apparent could be tied to stopping the Almighty once and for all.

Don't ask me when and how 😛 pic.twitter.com/Z3SEQwqq24

The full run down of the Heir Apparent’s perks, catalyst and first ornament are laid out above. Let us know what you think of the new exotics and tune into The Last Word with Lord Cognito and Ebontis every Friday, your go-to looter shooter podcast.