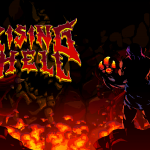 You’ll get to the top when Hell freezes over. This would slot nicely as Rising Hell’s official slogan. Hell is not a frozen tundra, it’s a pixelated bleak tower that taunts you the entire way up. Published by Toge Production, the game describes itself as a vertical platformer rogue-lite filled with adrenaline-pumping action. The description does not disappoint. 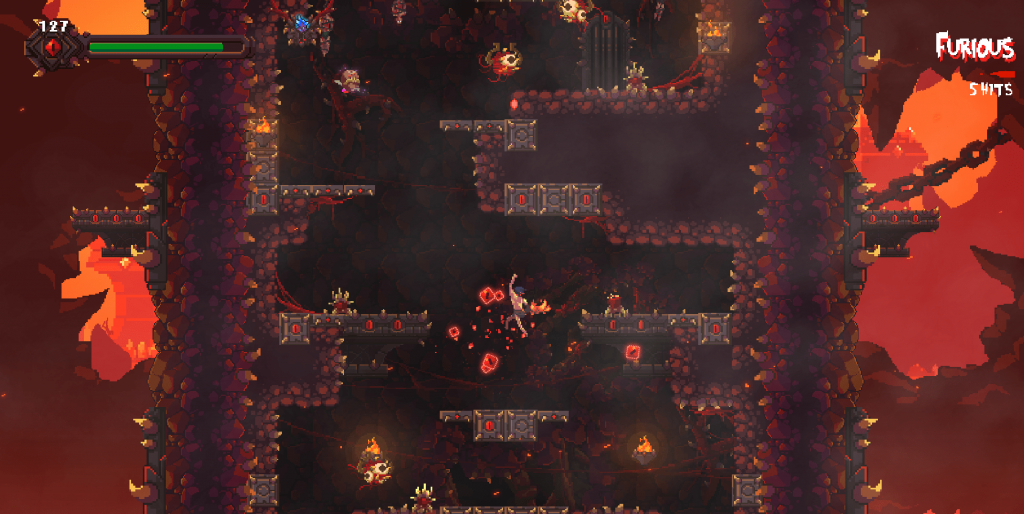 The term ‘rogue-lite’ is thrown around a lot of these days. As the genre becomes more crowded, developers try to differentiate themselves in any way. Rising Hell managed to do that within its core game design. Players fight their way up in Hell’s carnivorous Tower. The game is procedurally generated, meaning that every play-through is unique in its own way. This is a common staple of most rogue-lite titles. However, Rising Hell’s verticality is a fresh take on the game mechanic, while also employing another staple, strategic decision-making.

Player choice is baked into the game. As you make your way up the Tower, defeated enemies grant you souls to collect and spend. The action is broken up with safe spaces. Here, you’ll be presented with three upgrade choices.  Do you want to upgrade your souls-collecting radius or your attack? Like the rest of the game, these upgrade too are random as well. It also adds to the player’s conundrum. Do you spend your hard-earned souls now or save up a bit and not know what upgrade choices are coming next? The choice is up to you. 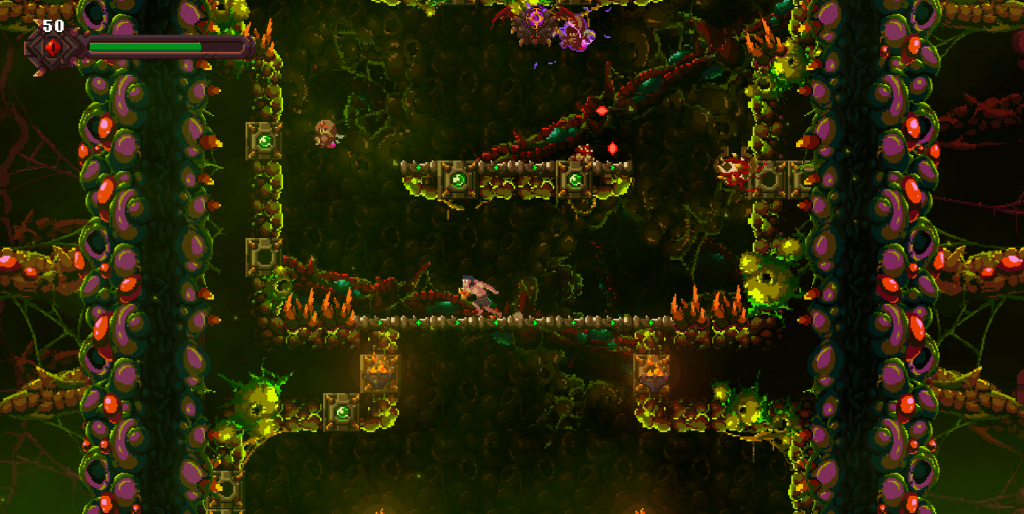 Rising Hell keeps its control scheme is simple. There is only one button for attack, jump, and dodge. This simple to play, difficult to master aspect makes the game very accessible while providing a meaty challenge as you make your way up the Tower. The game’s platforming sections also add another flair of tension to the mix. Buzz saws race up to mince you as you try to avoid them and incoming enemies along the way.

As you make your way up in Rising Hell, the game throws diverging paths for you to embark on. Do you enter the Penitentiary Crypt or face the Trials of The Necropyre? These diverging paths break the monotony and create unique play-throughs as mentioned before. Players will also encounter boss battles that really test your mettle. Defeating them is a rewarding endeavor.

Graphically, Rising Hell uses a pixel art style, which is becoming more common in indies these days. But, given the hellish nature of the game, it complements it well. Throwing down on pixelated tormented souls to collect souls is easier to stomach compared to a more realistic depiction.

The music is a real strong point of Rising Hell. As a life-long fan of heavy metal, the game’s music really speaks to me. The blistering melodies and gothic synths really add personality to the game’s atmosphere. It’s also a throwback to 80’s and 90’s low bitrate videogame soundtracks.

Rising Hell is available now on Steam in early access. The game reached version 0.9, so expect a full release soon. Are you interested in Rising Hell?  Let us know in the comments and don’t forget to check back for the latest gaming news and information.