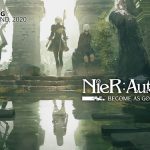 You are reading
NieR: Automata Become As Gods Edition Comes To Game Pass In April

NieR: Automata was a runaway success for Platinum games in 2017. The game sold an impressive 4.5 million copies as of today as reported by Gematsu. The success of the game definitly is a factor in Platinum Games being able to bring Wonderful 101, and NieR Replicant to modern consoles. There are still many that have not experienced Nier: Automata, that however seems to be changing with today’s announcement.

The official NieR Twitter account announced today that NieR: Automata BECOME AS GODS EDITION will be coming to Xbox Game Pass. On April 2nd, 2020 Xbox Game Pass subscribers will be able to play the 2017 action slasher as part of their membership. This marks another great Japanese developed title coming to the service. Xbox’s dedication to expanding the console’s variety of titles continues. After successfully bringing the Yakuza franchise to the Xbox ecosystem for the first time. Now Platinum Games bringing the game to Game Pass it shows a good focus by the Xbox division to deliver a diverse experience across their platform and services.

Will you be downloading NieR: Automata in April? Let us know in the comments and don’t forget to check back for the latest gaming news and information.