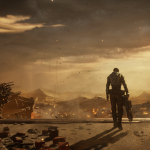 Next-generation fires are starting to heat up. With Xbox’s reveal of more information on the Xbox Series X. As well as Sony’s deafening silence, leaving many to wonder what they are working on. Many people are chomping at the bit for more information about what we could see with these next-generation consoles. Earlier today, Phil Spencer tweeted a photo teasing “enhancements” for Gears of War. Phil Spencer is currently visiting the Coalition which is located in Vancouver, Canada. No doubt the Coalition is showing off the latest in all things related to the Gears franchise. With Gears Tactics only just under two months away. Though this specific tweet teasing that this is the best the franchise has ever looked has piqued many fans’ interest.

Checking out some @GearsofWar "enhancements" with @MikeJRayner and team. Looks better than Gears has ever looked. pic.twitter.com/UimDDHO4Ie

What could these enhancements be? If we are to base them off of what we know, then it would be safe to say a higher frame rate could be achieved with the Xbox Series X. Perhaps 120FPS to make the gameplay even more smooth then the 60FPS that was available via Xbox One X. Raytracing could also be a huge part of what makes up these enhancements. While we do not have a lot of info in regards to how or what Xbox Series X’s raytracing will be. It would no doubt play a huge role in making the game “pop”. Gears 5 was already one of the best graphical showcases of Xbox’s first-party studios this generation. It is insane to think that this game could be improved even more then what the Coalition already did. We will have to see what these enhancements could be, as next-generation hype continues to build.

What games do you want to see get enhanced via next-generation consoles? Let us know in the comments and don’t forget to check back for the latest gaming news and information.