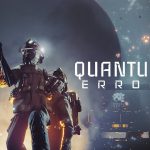 Quantum Error, a future cosmic-horror PS5 exclusive, is the second game from TeamKill after Kings of Lorn: The Fall of Ebris, released two years ago for PC and PS4. True next-gen games are a big deal these days, but we weren’t sure which next-gen details this title is hiding under its sleeve. How will it utilize the SSD while also being scheduled for the PS4? We have pinged the developer to discover more.

Watch the in-engine trailer for a work-in-progress and join us for a quick chat with the developer, after the video.

No, we are developing for the next generation first. The PS4 version will be ported from the PS5 version.
We are going for full new tech first 😎

Will Quantum Error use the PS5 SSD? Absolutely!

Developer TeamKill has shared that they will develop for PS5 first and then make an effort to port it back to PS4. Think Witcher3 making use of high-end PC while being ported to Nintendo Switch! But how are they really going to use the PS5? Will they do ray-tracing? Sure they will! Will they use the SSD? Absolutely. So, how is this game going to work on both next-gen and current-gen systems? Let’s ask them.

We will be taking advantage of the SSD on PS5.

The most basic way I can explain it on the subject of loading/unloading is that if you can load and unload without the use of loading screens by using the SSD’s speeds then the HDD of the PS4 will require loading screens.

After a brief discussion with the developer, it’s still unclear if we’re talking long elevator rides on PS4 but almost no ride on the PS5 or will it be something different. But as it stands now it seems that developers will not venture far away from the current-gen game design, but rather “optimize” for the next-gen so you will get a much better experience there. What is more than clear, though, is that when you die you will not wait for the game to reload your last save spot, on PS5, while you can expect standard behavior later on PS4.

Raytracing has already been confirmed before.

Raytracing has already been confirmed before. This part is not in question. Developers will code the game with ray tracing light techniques which, we were told by multiple developers, is much easier to do in Unreal Engine than standard “fake” reflections which will need to be coded specifically for the PS4 at a later date.

Is Quantum Error a PlayStation exclusive? Yes, for now.

Can we expect Quantum Error on Xbox and PC? Developers won’t say no 😇 so we suggest that you send them some love if you wish to see this game on your preferred platform!

Thank you! We are excited!
We won’t say never to other platforms, but as of now plans are just PlayStation 😇