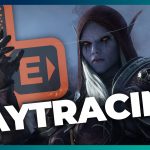 You are reading
Testing Out Raytracing in World of Warcraft

The World of Warcraft Shadowlands expansion is coming out on Nov. 23, and with it, new and unexpected functionality has been added to its game engine.

Raytracing has been implemented into the MMORPG World of Warcraft. Specifically, ray-traced shadows, and it can already be used through the game pre-patch since this functionality is not story or expansion related.

I tested the feature on a mid-range computer with an RTX2060 graphics card, a computer that can usually keep up with 4K60 in WoW by lowering the graphics details a few notches below the highest settings. However. raytracing in WoW makes this computer struggle to maintain 60 fps even in 1080p. Check out the video below for hands-on impressions.

Raytracing in World of Warcraft