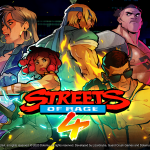 You are reading
Streets of Rage 4 Retro Unveiled

After nearly 30 years, Streets of Rage 4 is nearing release. it’s a full sequel to the classic beat-’em-up with a new retro twist.

The game will soon launch on PC, Nintendo Switch, PlayStation 4 and Xbox One. Be sure to add it to your Steam wishlist.

Check out LOGNET’s PAX East 2020 interview with Streets of Rage 4‘s Technical Director, Cyrille Lagarigue, and PAX East 2019 interview with the game’s Lead Programmer and Art/Creative Director. Also, be sure to take a look at LOGNET’s four-player co-op gameplay preview below.

Remember to stay safe at home and check back with Lords of Gaming for more video game news and coverage.