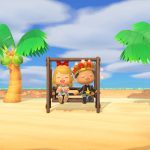 You are reading
Gaming and Dating During a Pandemic

The longer we abide by quarantine rules during the COVID-19 pandemic, the harder it is to manage relationships. And not necessarily platonic relationships either, but the one with your significant other. Days turn into weeks, weeks are turning into months, and it seems there’s no end in sight. So, how do you ease that pain? How can you keep the love going without physically seeing one another? Early in our relationship, my girlfriend and I found a solution: gaming.

You probably already know this, but long-distance relationships suck. All you and the other person want to do is be around each other, but physically can’t. It was the first challenge I had to face when starting a new relationship with this girl I was getting to know.

It was the summer of 2017. The beginning of August, to be exact, a week or so into us dating.

“I’m leaving for school in a few weeks,” she told me. Her school was roughly 600 miles away. My heart sank.

Of course, I thought.

It was the first time I met a woman I really, really liked in a long time. Witty, charismatic, and a great sense of humor are a few of the many amazing things about her magnetic personality. As beautiful as you can imagine with a smile that lights up the room. And she was totally out of my league, but my geek-ass got a date with her. So, I said the most honest thing I could think of at the moment.

“Then I’ll be waiting.” She blushed.

And so the long-distance challenge began. Now you might be thinking how naive I was to believe this would work. True, the odds were against us. The temptations of college debauchery are strong, so the worst thoughts come to mind. But I decided to trust her and she decided to trust me. During our first year of dating, we were able to cope with long-distance pretty well. She and I stayed busy with school work and we Facetimed frequently. All in all, it was going really well.

I wouldn’t be able to see her again until the holidays. Then again for her birthday in February after taking some time off work and flying down to see her. Summer 2018 eventually came around, and we made all sorts of plans like going to the movies and dinners, dancing, etc. But one hobby we both shared passionately was gaming. For someone who grew up with two brothers, my girlfriend was more than familiar with games, playing mostly Nintendo hits like Animal Crossing and the Mario series.

However, I was a hardcore gamer. It wasn’t just a hobby, but an aspect of life I took seriously. Thankfully for me, she quickly understood and embraced that side of my life fully. She also quickly caught on that the Kingdom Hearts series was my ride or die. Rather than just ridicule or laugh, she wanted to get to know why I cared so much about it. So, we decided to do something about it.

“Let’s play through the first game,” I suggested. So I handed her the controller.

“Yeah. I played this a hundred times over already. You should play.” She had never played an action game or even learned to control the camera with her left thumb at the time. It was another recipe for potential disaster. On top of that, we decided to record it:

Long story short, it was the best idea we could have ever had. At the same time, having my significant other play through a Kingdom Hearts game was something I have always wanted to do. Not only did Kingdom Hearts help shape my life growing up, but it also strengthened my bond with her more than I hoped. She and I still look back on that summer fondly and remember every laugh and struggle she faced.

The Beginning of the COVID-19 Pandemic

Fast forward to 2020: She’s halfway through her first year of P.T. school after graduating undergrad, I’m scouring job pages online while managing my writing career, and we were planning our second trip to Disney World. Since her P.T. school was closer to home, I was able to see her more often than usual as well. Three years strong in our relationship and 2020 was looking to be an absolutely amazing year with tons of potential.

Then COVID-19 hit. And it hit freakin’ hard. She came home early in her semester with the rest of her classes going online, while I got assigned to work-from-home duties near the end of March. Since we’re in a state with high spikes in coronavirus hospitalizations, going anywhere was not happening. Both of us live with our families, so why risk the exposure? As someone who works in news, I know all too well of the wide spectrum of stories of those infected. Quarantine lockdown is in place with no end in sight – just the hope that things will eventually go back to normal.

The Impact of the Pandemic

During times like these, anxiety peaks. Sleep is affected and isolation feels all too frequent. What would seem like a gamer’s dream to stay home, suddenly starts to feel like a prison. Reality is now on pause and we lost the remote, frantically trying to find it. Buried under stress and school work, life at home was becoming hard for my girlfriend. While my initial reaction to working from home was excitement, it soon turned into feeling trapped and distant from the world. We still talked on the phone every day and adjusted to our odd schedules, but the daily realization that we had to stay away from one another was taxing.

But one game broke us from that downward spiral. A game that came out at an unusually perfect time that would not only bring us closer together, but millions of others – Animal Crossing: New Horizons.

My girlfriend is an Animal Crossing fanatic, to say the least. Pouring hundreds of hours into Stardew Valley was just a teaser of what she would accomplish in New Horizons. Its addicting gameplay loop introduced with Nook Miles plus its simplistic and cute personality was the perfect quarantine game. Over the past few months, we’ve spent hundreds of hours (her close to 300, myself nearing 100) customizing our islands, visiting each other in-game, sending letters, and even sharing tips for tarantula island and turnip prices. 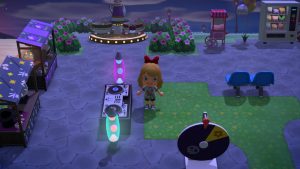 She made a carnival on her island!

So the time eventually came where we were ready to have our first official Animal Crossing date night. Our islands were nearly complete and ready to be shown off. I would make sure to get my character the spiffiest outfit I could grab because yes, it was a special night. We began Facetiming each other so we could still talk to one another as we met up in-game.

The Plot Twist In Our Date

I was beginning to boot up New Horizons when she looked at me and said, “I can’t connect online, babe.”

In the game, I run to the Dodo Airport to see what the hell is going on. After five million button presses to try to connect online, I got the same result. Both of our internet connections were fine since we were also Facetiming…. so could it be the Switch itself? Or Nintendo’s online? After some quick research, it turns out Nintendo’s services were down and there was not an estimated time it would be back up.

It was a bummer for sure, but we continued our virtual date as normal without the fancy meal or Animal Crossing. A few hours later, the night was getting late and she was feeling sleepy. But she decided to try connecting to New Horizons‘ online one more time before hitting the hay. The time in between felt like forever, hearing the light musical tones of the game connecting to the online. But a few moments passed and…

“I’m in!” she said excitedly. Without hesitation, I grabbed my Switch and launched the game so our date could continue. Below, you can see our fun adventure on my island, Puerto Rico, as well as her island, Elysium: 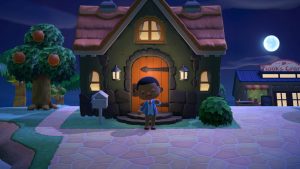 Of course, ya man had to look suave for the big date!! 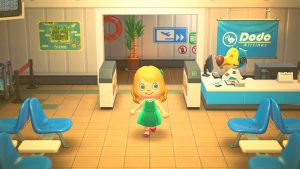 And the girlfriend putting on her best dress in my favorite color! 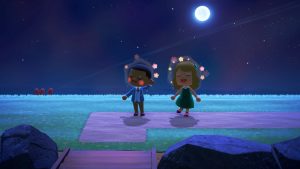 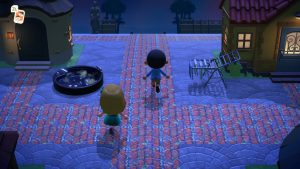 We go for a fun walk around my newly-built town in Puerto Rico called Bayamón. 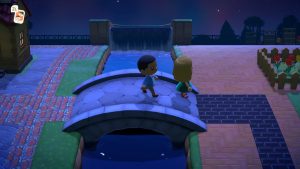 We head to Aibonito, another town on my island. 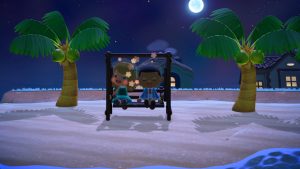 Then for a quick chat in the beach scenery near the town of Aibonito. 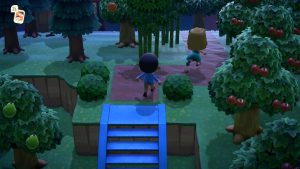 Next, a fun tour through El Yunque National Forest! 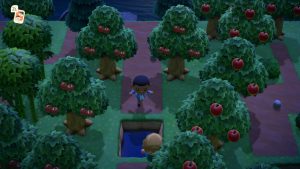 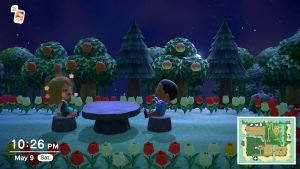 A (late) moonlit dinner in Yunque. 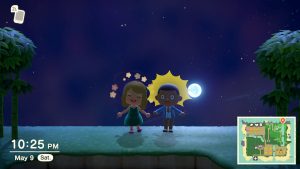 She wanted me to jump into the waterfall… 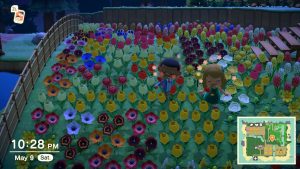 Instead, we took a stroll in EL Campo del Flores (Flora’s Field, Field of Flowers) 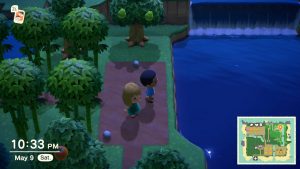 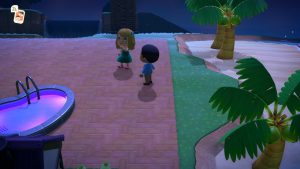 We finished the trail and ended up back in Aibonito. Before we headed to her island, she had a present for me… 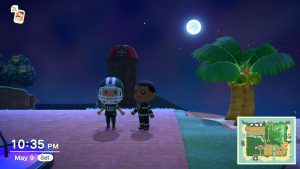 A fireman outfit My father is a firefighter, so it was fitting! She changed into her Jets football uniform – J-E-T-S! 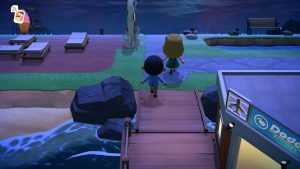 Off to a quick visit on her island, Elysium. 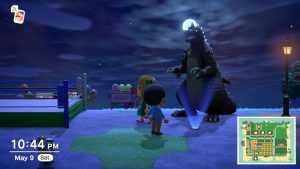 The latest edition to her theme park. 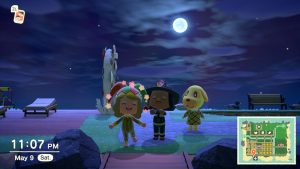 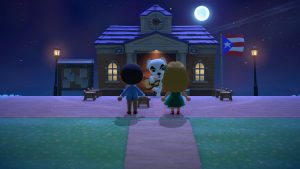 Then ending the night with some sweet Bachata tunes by K.K. back on Puerto Rico

A long-distance relationship is a hard test for two lovers. Dating during a pandemic and in quarantine is even harder. A lot of us are dealing with anxiety, depression, self-doubt, the list goes on. But we’re not alone. We all have our ways on how we cope with those tough feelings as well.

Some couples act silly and dance to music together on Facetime. Some of us binge Netflix movies together. Some of us read the same novels. And others game together.

There are ways to make dating during a pandemic work. Effort, honesty, and enthusiasm are essential. It may be hard, and sometimes you may not even have the effort, but trust me when I say it is worth it. It’s worth seeing the smile on my girlfriend’s face. It’s worth hearing her laugh and knowing someday I’ll get to see her again. A virtual date is still a date. An end to this kind of living may not be visible yet, but it’s in sight and I’m keeping my head up. You and your significant other can too.