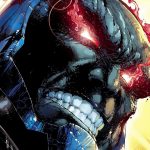 Those of you who were disappointed by the bizarre story pacing in the 2017 Justice League movie now have a reason to be optimistic. We have confirmation that the super-powered bad guy Darkseid will indeed be in the Snyder Cut of Justice League and the brutal prince of evil is played by actor Ray Porter. The announcement came from Porter’s official Twitter account and can be seen below:

That said, and because I’ve been given permission…
Hi, I’m Ray. I played Darkseid in Zack Snyder’s “Justice League”.
There. It’s out now.

The casting is appropriate as Porter was always intended to play Darkseid in Justice League. Unfortunately, his involvement with the film had to be cut after director Zack Snyder quit the production to attend to a tragic event that impacted his family. Joss Whedon took over the production and several story ideas (including Porter’s appearance as Darkseid) and about a third of the film’s runtime was cut.

As you might expect from a film with such a troubled production period, reactions to Justice League were mixed. Even worse, Darkseid was only referenced in the film but never actually appeared. The movie’s disappointing performance at the box office prompted Warner Bros. to shy away from a cinematic universe based on DC Comics in favor of standalone films such as the recent Joker.

Rumors of a Snyder cut of the film which includes previously discarded elements (like Darkseid!) have swirled among moviegoers and comic fans for quite some time. However, ‘the Snyder Cut’ was only recently confirmed to be scheduled for release and Ray Porter has finally been given permission to confirm his involvement with the production.

Those of you itching to see Darkseid in action on the big screen are going to have to wait a bit longer. ‘The Snyder Cut’ will be released next year on streaming service HBO Max. As of this writing we do not have any information regarding a release on other platforms but I would be shocked if there was no option to purchase the movie outright.

Facebook Twitter Google+ LinkedIn Pinterest Tumblr
Previous article Animal Crossing: New Horizons outsells all Digitally in April
Next article What We Do in The Shadows Will Get a Third Season

DC's New Gods and The Deep Have Been Canned