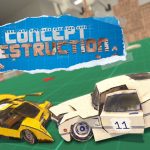 You are reading
Review: Concept Destruction

From the mid-1990s to the turn of the millennium, there was a spate of games that focused on vehicular combat and wacky racing ideas. If you take two of those franchises—Destruction Derby and Micro Machines—and combine them, you get Concept Destruction. It’s a game that manages to encapsulate the spirit of those PS1-era classics, even if it is a little bare in the game modes department. 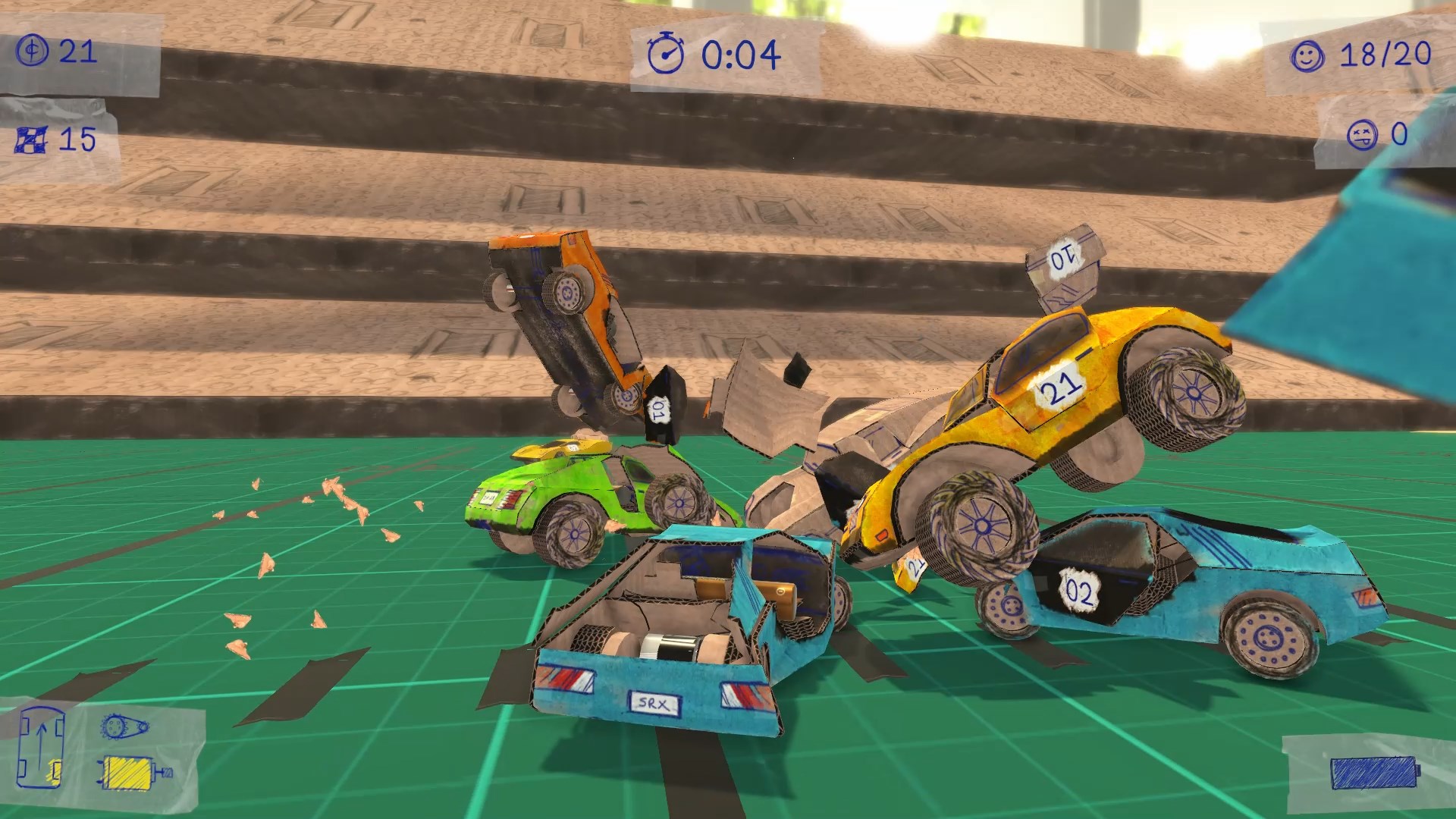 With an arts and crafts setting, Concept Destruction takes place on a tabletop and has you controlling a miniature car made of cardboard. Your aim is to smash into and disable the nine other cars in the level in true Destruction Derby style. And because all of the mayhem takes place on a tabletop, obstacles consist of books, pencils, rulers, and sticky pads that are littered around the environment. There are also ramps and structures made of cardboard, which allow you to take the mayhem on top of buildings and into the air. In an interesting twist, the table you drive on is actually in a full-size car design studio, which you can see in the background through a depth of field effect.

You might think that playing the game’s tutorial might be a good idea before you jump into action. Unfortunately, the tutorial only teaches you the absolute basics: hold the trigger to accelerate and crash into another car. It would have been helpful to have a more fleshed out tutorial, explaining the game’s different modes, but the reason there isn’t one soon becomes obvious. 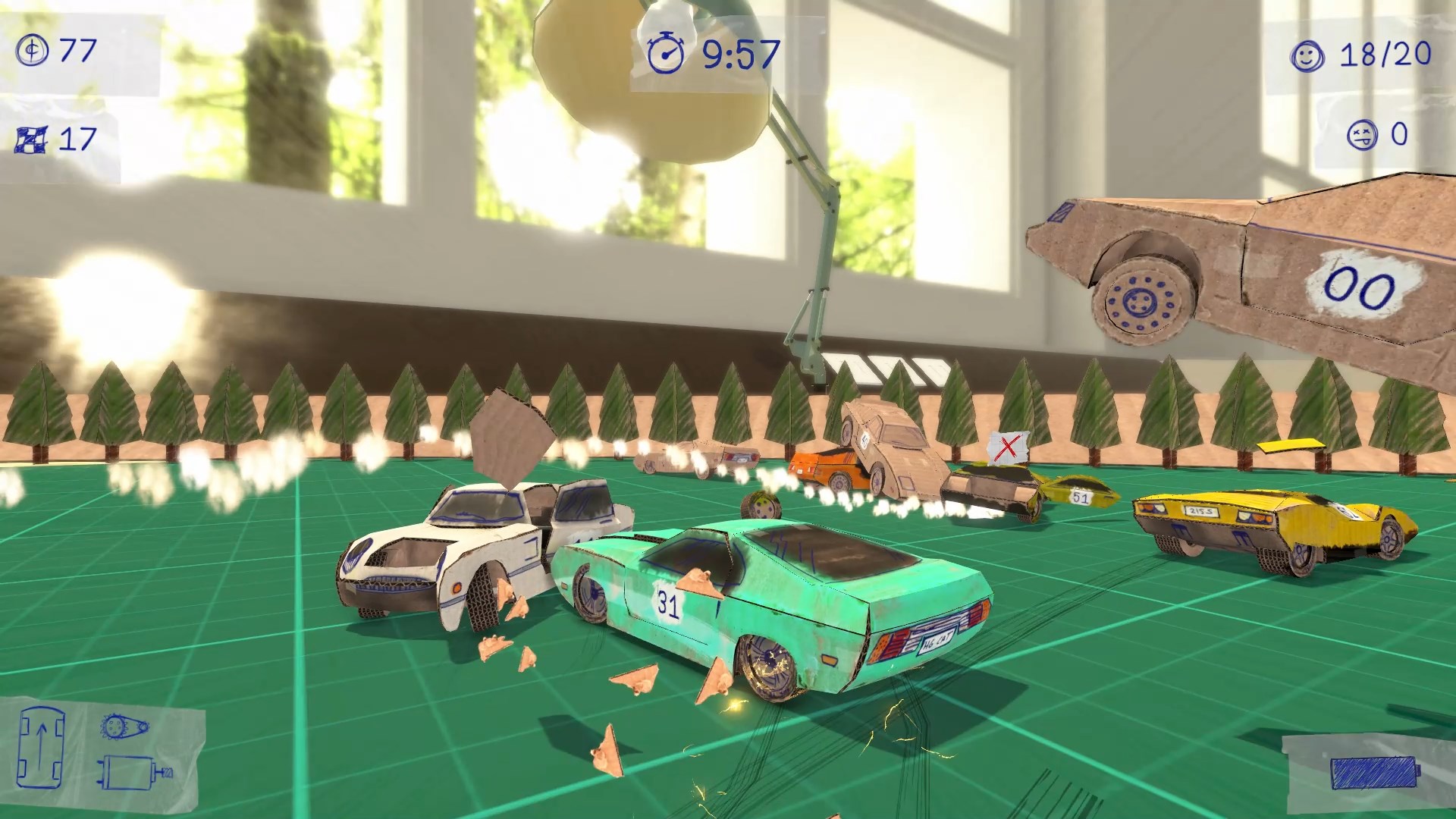 The game only has two modes. You can play either a single event or a championship. A single event is the equivalent of a quick play mode—jump into the action and get to the crashing. Championship mode, however, is essentially just a series of single events but with the addition of a leaderboard. The more destruction you cause to other players’ vehicles, the more money you earn. This money can also be used to unlock a handful of new cars to use in subsequent games as well.

In the championship mode, each race is conducted on the same table but with a slightly different layout of buildings and obstacles. These are not randomly generated, however. Each race has a level layout unique to it. They differ from one another, but they remain the same on subsequent playthroughs.

Whichever game mode you choose, the gameplay consists of three minutes on the clock, ten cars, and as much destruction as you can dish out. Your only goal is to survive, while also inflicting as much damage to others’ cars as possible. The more damage you cause, the more money you earn. Go too far and get your own car wrecked, though, and you’ll be heading back to the main menu to try again. 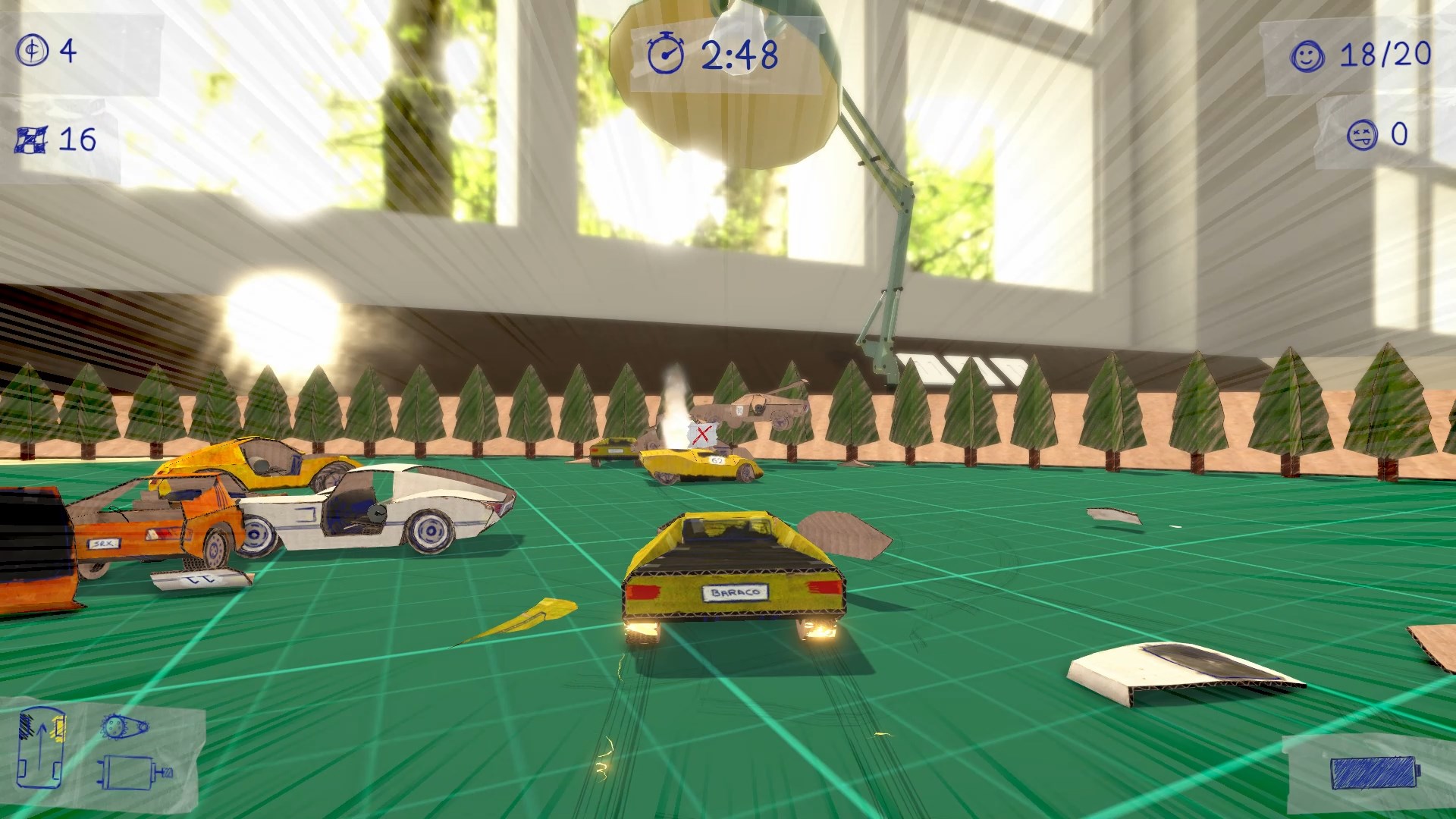 Concept Destruction features realistic damage effects. Doors and panels can be crushed or bent, and if your wheels are totaled, you won’t be able to turn properly. Damaging a car’s battery will stop them from working entirely (we are dealing with cardboard concepts, after all). The graphics represent this well. The corrugations in the cardboard are visible. The artwork on cars and objects looks like it was really drawn and colored on by a pencil or crayon.

Of course, controls are an important aspect of navigating this world, but they’re a little lackluster. The steering—on the Nintendo Switch, at least—is a little laggy and imprecise. You just don’t really feel connected to the car. In a game about driving, that’s a problem. The controls are also basic, amounting to accelerate, brake, handbrake, and boost. So while the destruction may be realistically simulated, the controls are arcade-like.

What is good, however, is the game’s music. A badass soundtrack of punk-rock and metal songs will get you in the mood for three minutes of full-on mayhem and destruction. There isn’t any licensed music, but Concept Destruction’s original score is good enough by itself. This simple nature is representative of the game as a whole, too. But, in a way, that’s where its strength lies. 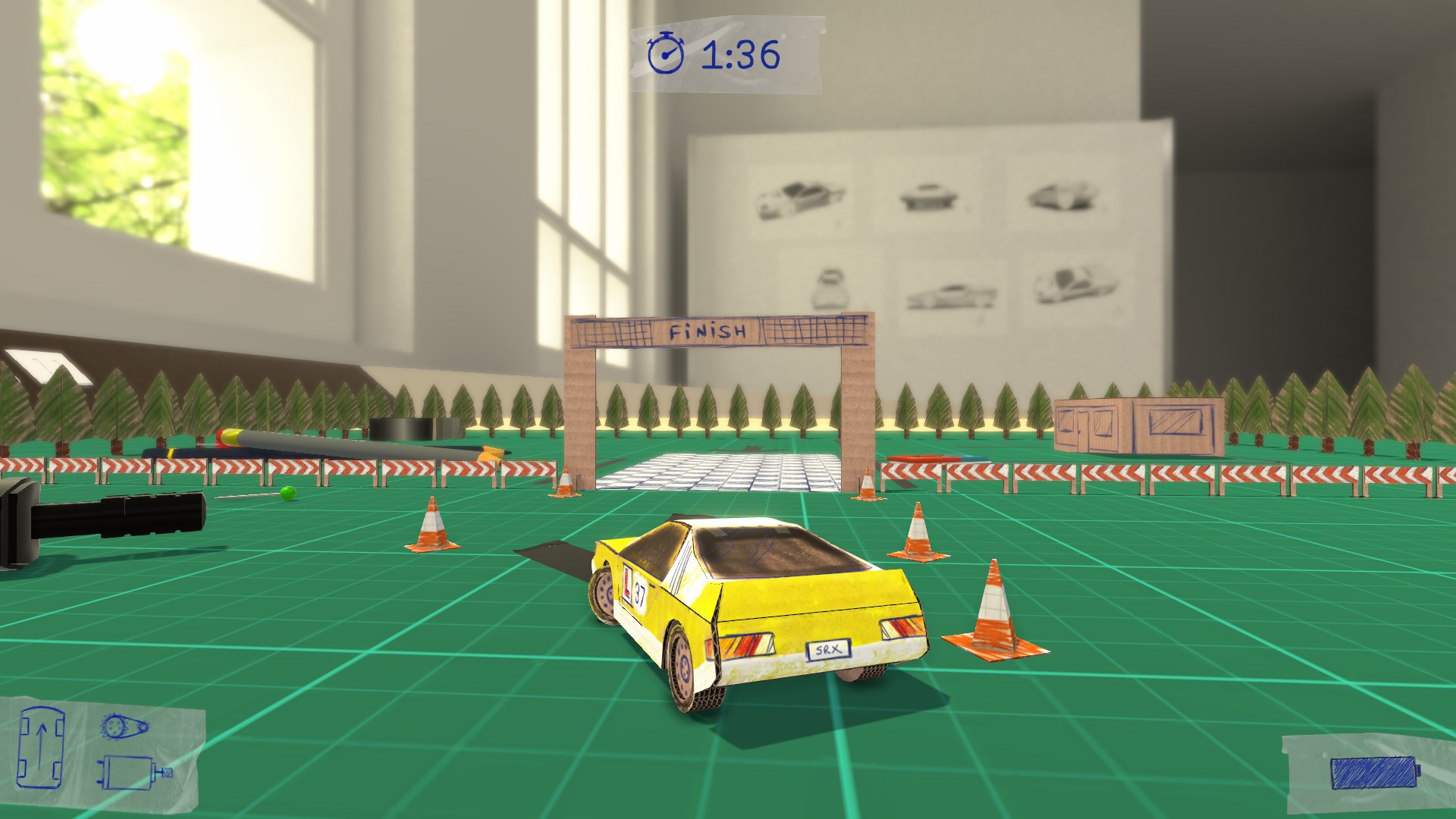 No, there aren’t many modes, and that’s a shame. And apart from crashing into other cars in an attempt to utterly destroy them, there isn’t anything to do. But Concept Destruction takes you back to a simpler time. A time of basic-but-fun games that you could jump in and out of. Sure, there isn’t much depth here, but its simplicity is refreshing in an era of hundred-hour RPGs. Although, this game would have benefitted from an online multiplayer mode to allow players to go head-to-head and prolong its lifespan.

Concept Destruction is a fun romp, but it simply won’t keep you engaged for hours. A game like this, however, is perfect to own on the Switch. If you’re out and need to kill time, or if you’re sick of concentrating on story games, whip this out and you can be ramming other cars in seconds. Combine this with a great soundtrack and it makes for a rip-roaring time—while it lasts. Once the novelty has worn off, there’s nothing else to do. Accept it for what it is and Concept Destruction is fun and certainly worth your time. If it’s depth you’re after, look elsewhere.

7.1
Good while it lasts, Concept Destruction is a fun but barebones Destruction Derby-like vehicular combat experience.