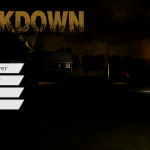 You are reading
Review: Lockdown By Chriton Studios

Lockdown by Chriton Studios is a small survival horror/escape game that harkens back to the time of classic FPS games like Counter-Strike. You are a survivor of the AME-3 virus. Your entire city has gone into lockdown, and you have to find a way out. The trick is, there is only one way to get out, and only the first player through the airlock on the edge of town will be triumphant. Getting out isn’t as simple as finding a door. You and as many as ten other players first have to find a keycard to unlock the door. As you might imagine, ten players on this small of a map, makes for some fairly stressful situations.

Lockdown is created by two people, and this is the first game they have designed. Both are self-taught with no previous training. They had to rely on tutorials and other resources to help create their vision. Lockdown is currently in beta, so keep in mind things will constantly change with additional updates. 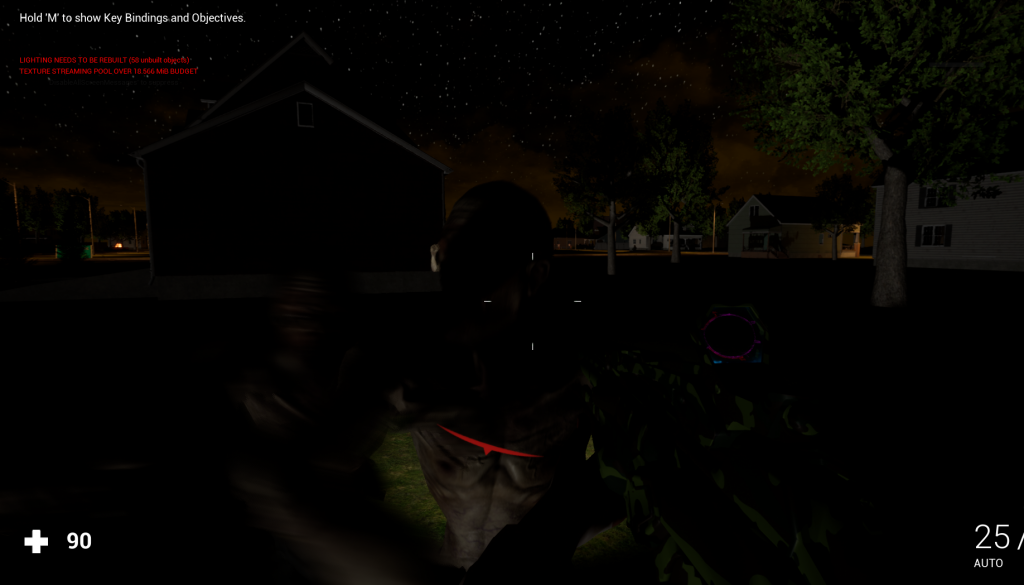 In Lockdown there isn’t much of a story with the Steam page providing the backstory. It’s understandable as to why, being a heavily multiplayer-centric game and still in its very early stages. Lockdown still has room to grow in this area if that’s the direction the developer goes. Adding selectable and customizable characters and a short story intro at the full launch of the game would be greatly beneficial. You can tackle the game in single-player mode, where you play against other AI bots. Or of course, dive into multiplayer through Steam and fight against other players. 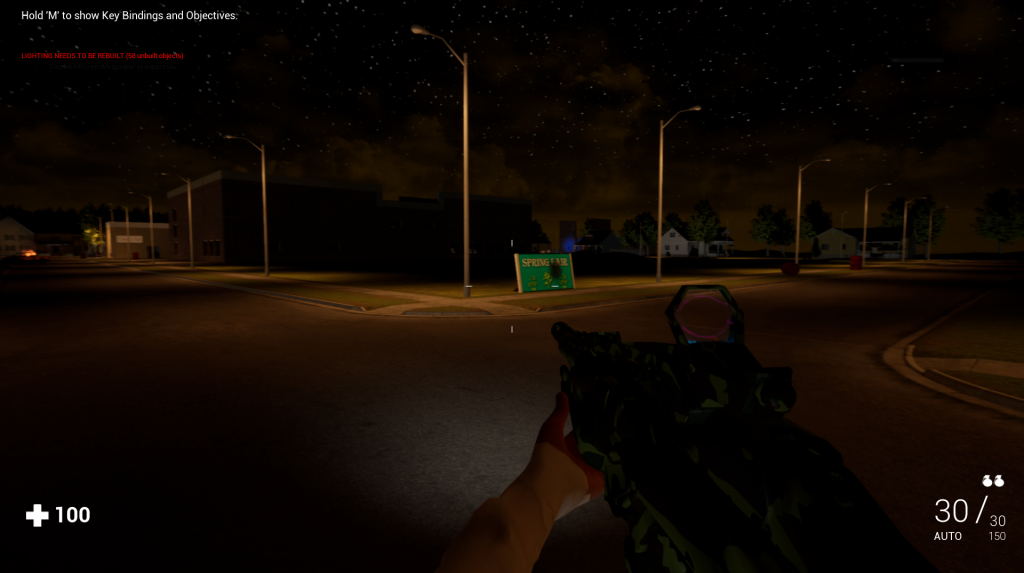 The gameplay in Lockdown isn’t that great. Of course, we have to take into consideration the origin of this game. During my time with Lockdown, there were rough areas that I noticed but nothing seemed game-breaking. Zombies randomly popping up behind me and player AI bots getting stuck around homes are the only two major gameplay issues encountered. I didn’t have the game crash or stutter but sometimes frames do drop down to about 30-40fps in intensive situations. Lockdown does feel reminiscent of the late 90’s FPS games that many people grew up to love. Thankfully the overall combat feels good, which is what really matters.

There is not a wide variety of weapons available, though in this circumstance you may not be alive long enough to care. You start with one automatic rifle and one semi-automatic rifle meant for distance shots. There is also a shotgun and a heavy machine gun that can be acquired during the match, though you have to defeat another player to obtain them. Be forewarned, the shotgun has a very long range. The aiming is smooth and snappy for all the weapons. I can pick off an AI enemy moving in the distance fairly easily using either rifle. Add in a knife and some grenades, and we have ourselves a party. Speaking of parties, it gets chaotic when playing against other gamers. There are some good hiding places around the map, but the constant search for the keycard makes things tense.

The keycard can spawn in 300 different places on the map. This makes the initial hunt a frantic race as players try to cover as many locations as quickly as possible. Thankfully over time throughout the match, the keycard spawns in multiple places. So you won’t go the whole game trying to find a single card. This also means that anyone, at any time could be running through that airlock to win the game. There is no indication of who has the card, only that one was picked up by a player. Oh, and maybe watch out for the zombies as well. They tend to pop up now and then, almost randomly. The AI for them also isn’t the greatest. Occasionally the bots get stuck behind barriers and little things, making them easy targets. This takes away from the fun, knowing that the AI are fairly easy targets. 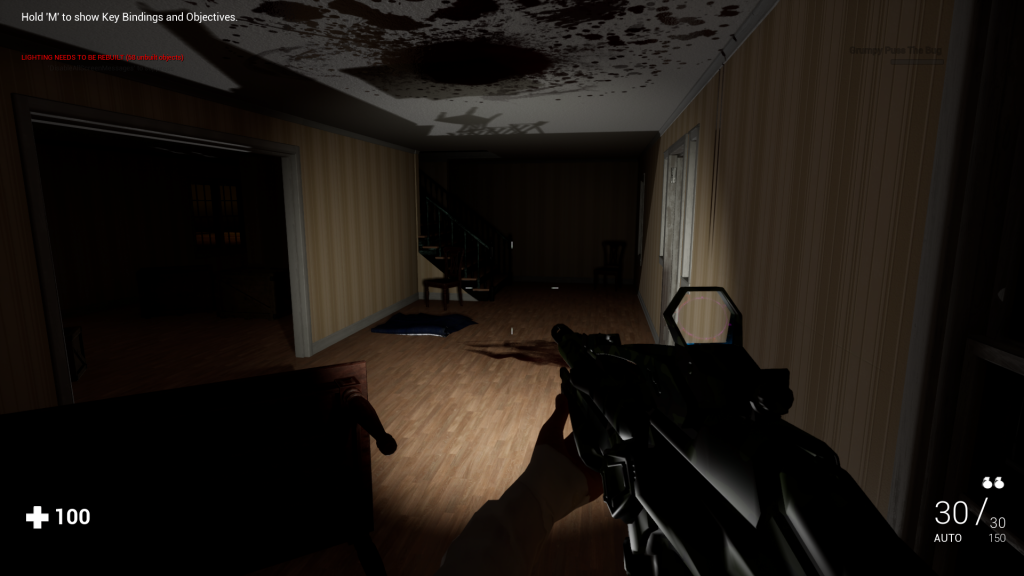 It’s safe to say these are not top-notch graphics, but this is a great place to establish a foundation in design. As mentioned earlier Lockdown is very reminiscent of earlier FPS games like Half-Life and Counter-Strike. It’s a nice throw-back for those that grew up playing those games. Thankfully there don’t seem to be any major issues with keeping image quality steady throughout the game. The game sets a dark tone when you first jump in. If you don’t have some sort of light source, it gets very dark. This can make it tricky to traverse around. On one hand, you need the light to see. On the other hand, the flashlight you carry also screams out your location. This adds a welcome dose of tension every time you see a flickering light in the distance.

One area where improvement could be made though is the in-game environment. You have good house placement with plenty of trees, but more environmental “fluff” would greatly increase aesthetic appeal. The trees and buildings are fairly spaced out. Adding some more shrubbery, vehicles and random equipment would bring more life to the game. This also goes for the inside of the homes and buildings themselves. They are currently fairly vacant. Some homes you’ll find some furniture in, but it’s to a small degree. Random pieces of furniture, blood on the walls, and random graffiti aren’t nearly enough when a decade ago Left 4 Dead was doing interesting ambient storytelling with its environments. Over time this should all be rectified, and once that happens Lockdown will look substantially better aesthetically.

There isn’t too much to touch on here as well in this section. The audio is very basic. The guns sound fine, though for some reason the shotgun sounds like some sort of laser gun. The zombies, however, tend to get a little loud when you are close. There were quite a few times where I would be exploring a house searching for the keycard, only to hear a very loud growl in my ear from a zombie upstairs. You can also hear players walking around, which is fairly important in pure multiplayer titles. Better ambient noise balance would make a world of a difference here. In the end, there isn’t a whole lot to talk about. 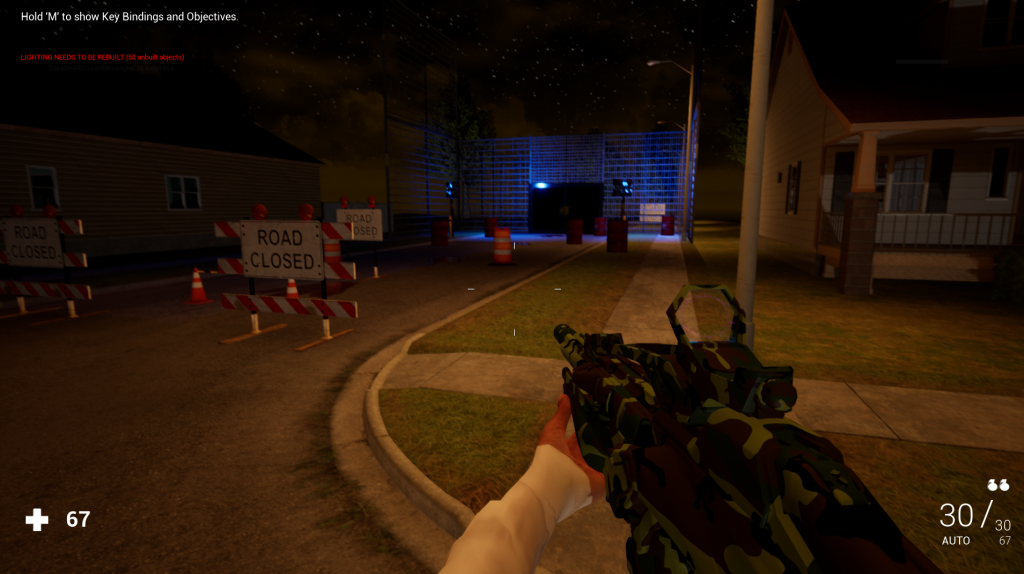 Lockdown is a full multiplayer title. The single-player mode is a copy-paste of the multiplayer with bots taking the place of human players. These are also fairly easy bots to deal with. It’s a great way to get used to the game, or just relax and win a couple of rounds on your own. Playing a few single-player rounds can also help you gain familiarity with the map. With the other standard multiplayer mode, you have to link up through a server list to find a match. There were no issues encountered with regards to latency and response time. Still buttery smooth as if it were local play.

Lockdown is a competent step into the beginning of video game development for two new bright minds. There is a foundation to build from, which could lead to a successful title. However, so much of it is just potential and not what is actually on the screen, which is just fine for a beta. Even though the graphics are not all there, it is difficult to expect anything more from people who are so inexperienced. It’s not full of fancy textures or lighting, but the game doesn’t require that to fulfill its goals. The gameplay is solid, providing a good FPS experience that could keep players coming back for more.

A 1 vs 10 person battle royale match can go very quickly if you are on the wrong end of a barrel early on, or a zombies bite. Lockdown isn’t up there for overall game quality, but as mentioned earlier there is a solid foundation to build from. Players can feel reassured that they will get some enjoyment out of this game. If the support for Lockdown continues to be steady and fruitful, the game will shine.

Lockdown is an average multiplayer title that has decent gameplay. What it lacks in overall aesthetic appeal makes up for in solid gameplay foundations and long-term potential. Given time, this game could truly blossom into something great.