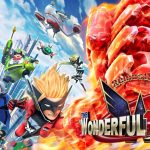 You are reading
Review: The Wonderful 101 Remastered 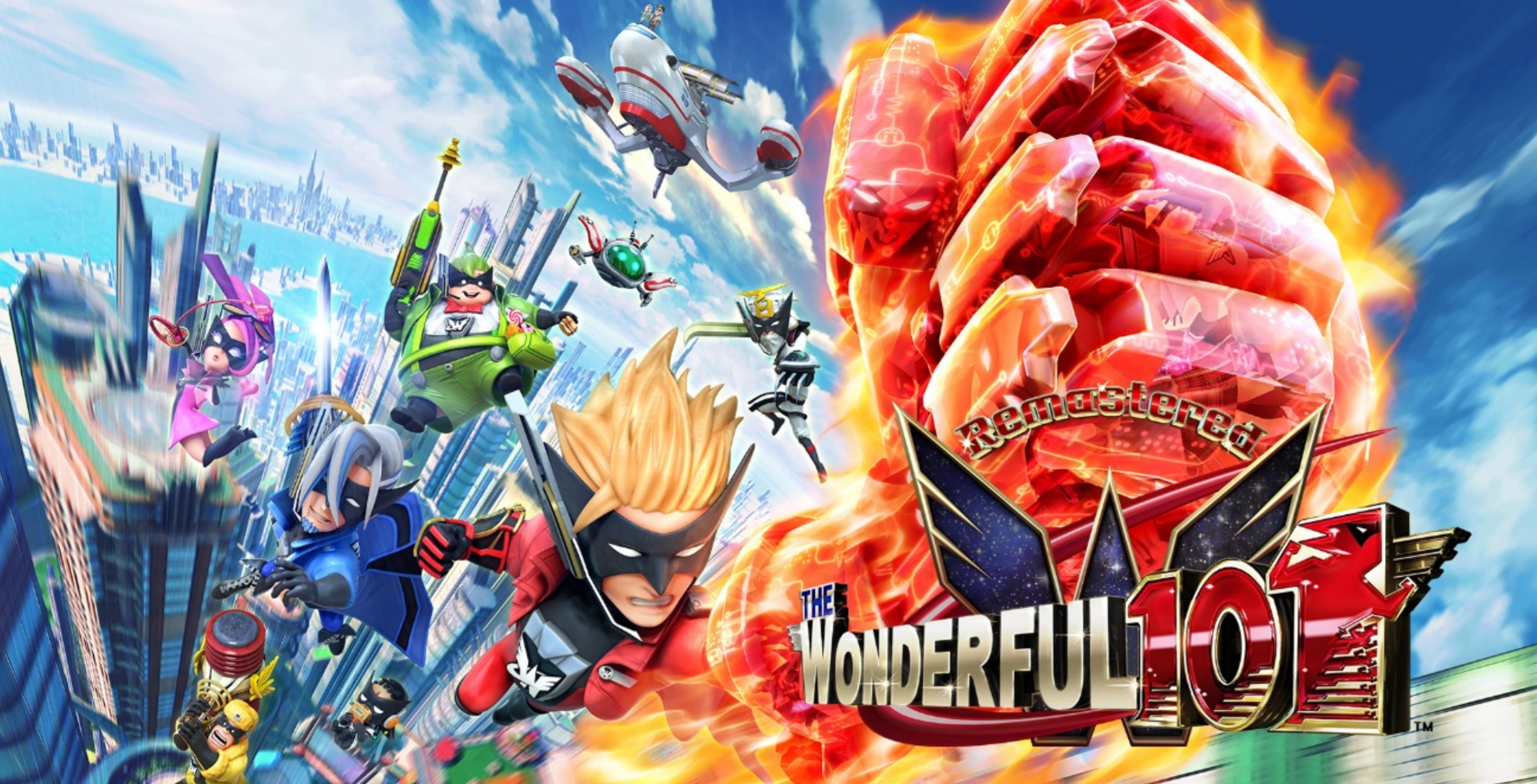 Earlier this year we had a chance to sit down with the PlatinumGames heads and talk about the future of their studio. At the time, Atsushi Inaba and Hideki Kamiya were laser-focused on getting started on their own as a publisher. That beginning started with The Wonderful 101: Remastered. The often noted last of the Wii U games to get ported to the Switch had just come off it’s successfully funded Kickstarter campaign. Over 33,000 people have come together to raise over $2,000,000 for the game’s transition into current-gen consoles. Soon the game will be finally hitting storefronts. We had to find out, does The Wonderful 101 hold up today?

The Transition To Current Consoles

How The Wonderful 101: Remastered has made the transition to other consoles fairs nicely. There aren’t huge story changes or gameplay changes like you would see in Final Fantasy 7’s remake this year. It’s not a pixel by pixel remake found in the Crash Bandicoot trilogy. It’s also not just a simple port over to these consoles. The heart and soul of the game exists in time from seven years ago but the visuals do not.

If you are familiar with the Wii U version of the game, this is very similar to Captain Toad’s Treasure Tracker and Super Mario 3D World. The lack of the Wii U gamepad is addressed in a similar fashion as playing the game on a Wii U with a Pro Controller. That is addressed through a built-in Picture-in-Picture mode that is toggled with the ”-” button. Also, there are minor changes to the balance and economy of the game.

There is a little bit of a staggered launch, some Kickstarter keys are already out. The digital launch will be staggered over May 19th in the US, May 22nd in the EU, and June 11th in Japan. The physical release has been altered due to Covid-19. Japan will get their copies on June 11th, US on June 30th and EU on July 3rd. The game will be launching at a discounted price in all regions $39.99/€44.99/39.99GBP/A$59.95.

The Wonderful 101: Remastered sits at around 17 hours of total playtime in its story campaign on normal. There is an offline couch co-op mode that supports up to five people on the Switch and 4 on PS4 and Steam. Out of the box, the game supports English and Japanese audio. In addition to, French, German, Italian, and Spanish subtitles. The Switch install version is 7.6GB, the PS4 version is close in size. 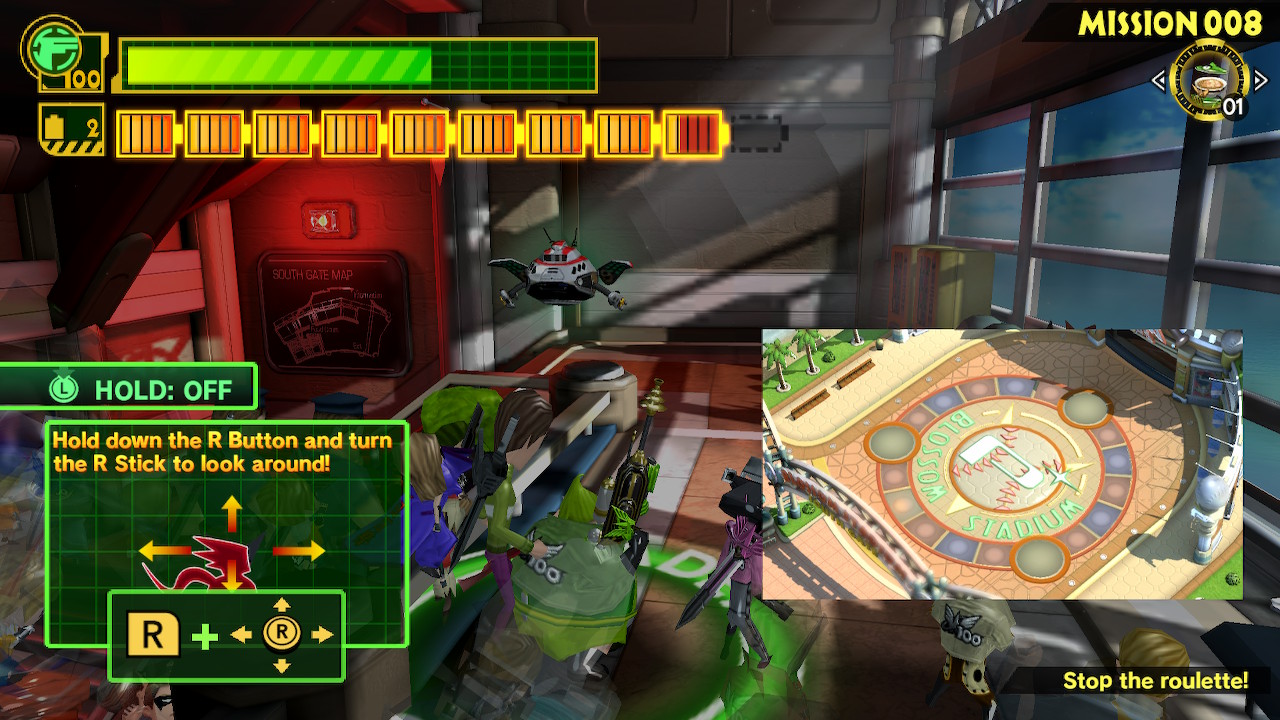 The UI is just too much in this game and is often a problematic mess.

The Wonderful 101: Remastered is made by the same team that worked on Bayonetta, NieR:Automata, and Astral Chain. When I think of Japanese action video games my mind goes right to the rich history at PlatinumGames. When you think of how The Wonderful 101: Remastered plays think of some of the great Japanese action games you have played over the years. The game at its core is super fun, the boss battles are fantastic. However, there are some real issues with the gameplay.

Creating a top-down game sets barriers with the camera that can sometimes be hard to overcome. So hard, I really don’t think Nintendo was in a rush to make this one of the premier games that moved over from the Wii U to the Switch. That may be why they let PlatinumGames do it on their own. At points the top-down camera view is OK, it makes this game feel unique. Then there are moments where you can’t see where you are moving ahead towards.

Not only moving forward the action can pick up and then you can’t see anything at all on the screen. The animations of the attacks can sometimes get large and colorful. This can lead to not seeing what is going on with the attacks. Visibility is a huge issue for me, the HUD is too much and you can’t turn it off completely. There is no reason for the health and energy bars to be as large as they are. It’s a major issue for me and hurts the game’s replayability. Some people will be overwhelmed by how much is on the screen and simply put the game down. 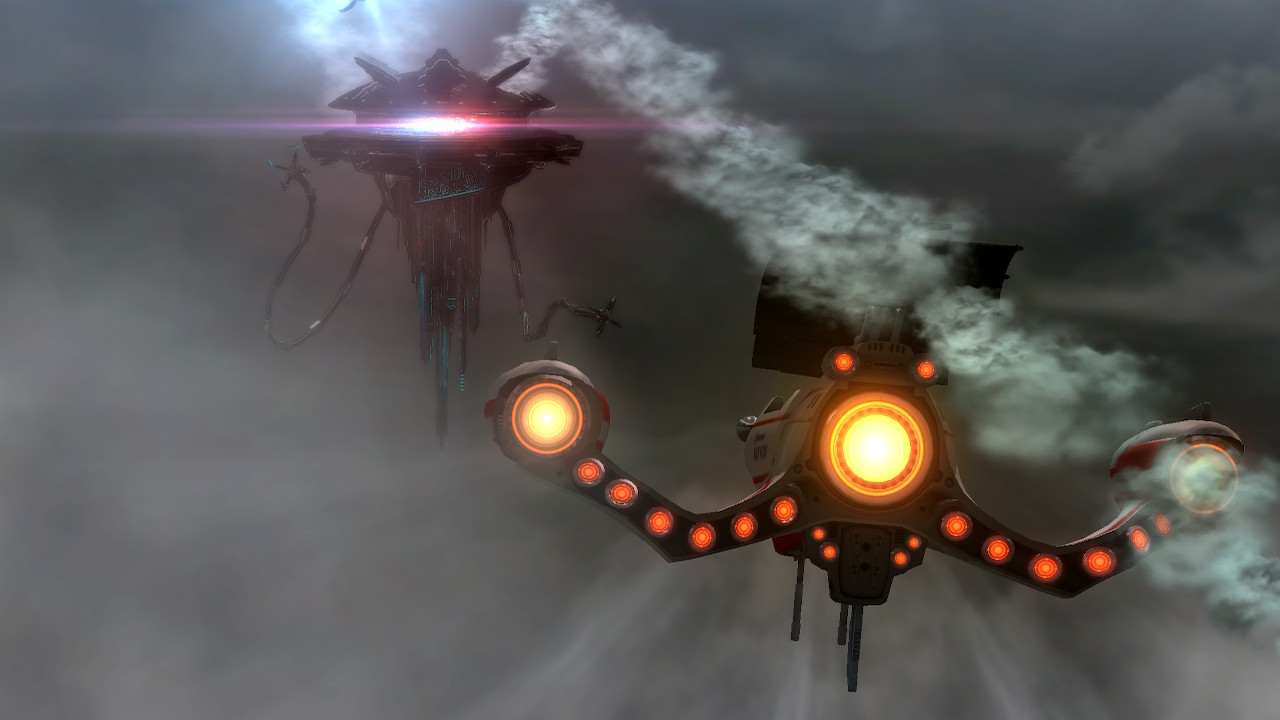 Visually the game is just OK. While you don’t see jaw-dropping cutscenes, it doesn’t look horrible. The gameplay and level design do not lean on visuals to hook you in. The dialog scenes are in a motion-comic style and paired with top-down camera gameplay. So there isn’t a lot of room to go wild over the visuals. The framerate on the Switch version that I played was super smooth. There were absolutely no slowdowns that I noticed. Undoubtedly that is a significant accomplishment for a game running at 1080p on the Switch.

I really dig the art style. The Wonderful 101: Remastered uses a Supermarionation style for the characters that reminds me of Viewtiful Joe and Team America World Police. The game has layers of superhero comic book styles and effects. Each level has it’s own unique look and feel. You have your traditional lava level and water level, as well as some really cool other locations. The details and the unique colors used in each setting define a fun atmosphere.

I absolutely love the audio for the game. In addition to the brilliant use of an orchestral score, there is a fun theme song that sets the tone. Two of the game’s tracks “The Won – Stoppable Wonderful 100” and “Tables Turn” have been updated with live orchestras. In addition to music, the sound effects are fantastic. They pair with the visuals to set a tone for what PlatinumGames does for action games in such a unique way.

As well as the sound effects and score, the game’s voice acting is just as brilliant. While not all of The Wonderful 100 is given life the few that do really shine. Even with the use of the motion comic cut scenes, the voice actors breathe life into the dialog. When the conversations happen it’s hard to notice it’s not always a fully animated cutscene. 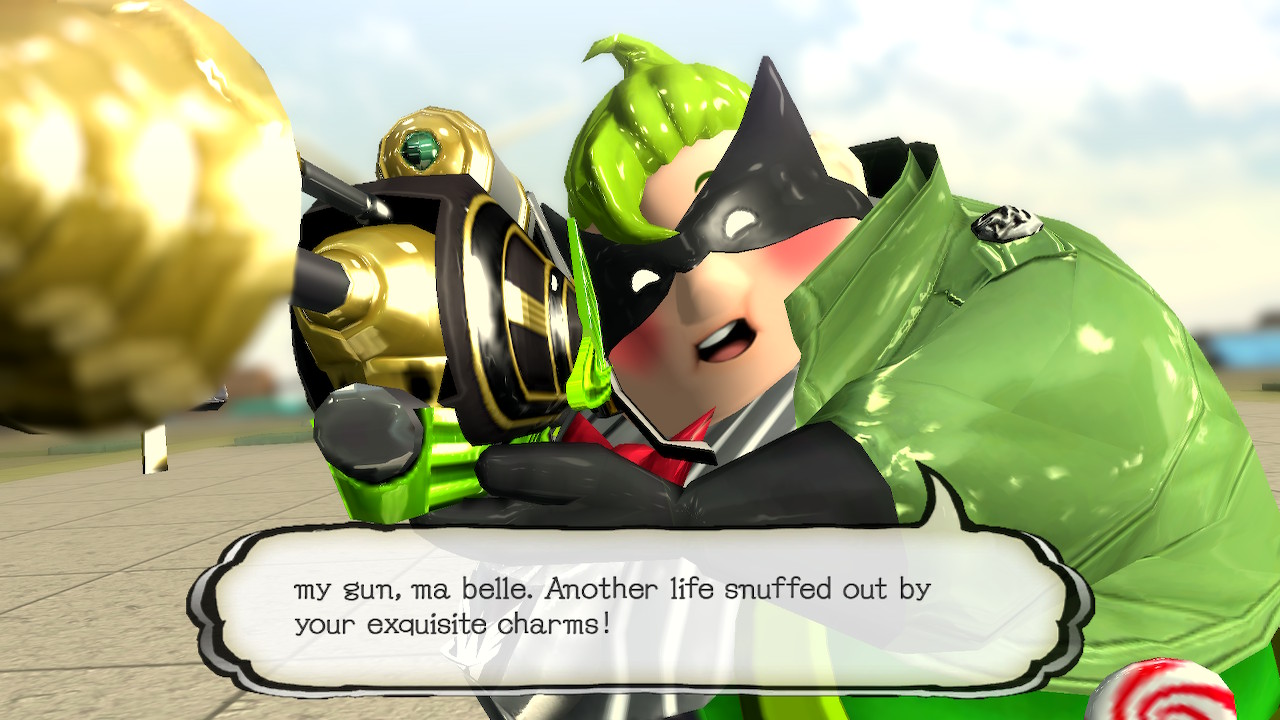 I really enjoyed the story of The Wonderful 101: Remastered. The story helped push me through some of the gameplay moments that were a real slog sometimes. The characters are fun and interesting each in their own way and playstyle. However, I am not sure I would have called the game The Wonderful 101. It’s really more like The Wonderful Seven or Eight. Not all of the Wonderful 100 is completely flush. Only a small handful of them get dialog and useful powers. The ones that I did get to play as I really enjoyed. There are comedic moments in the game that really save it here. 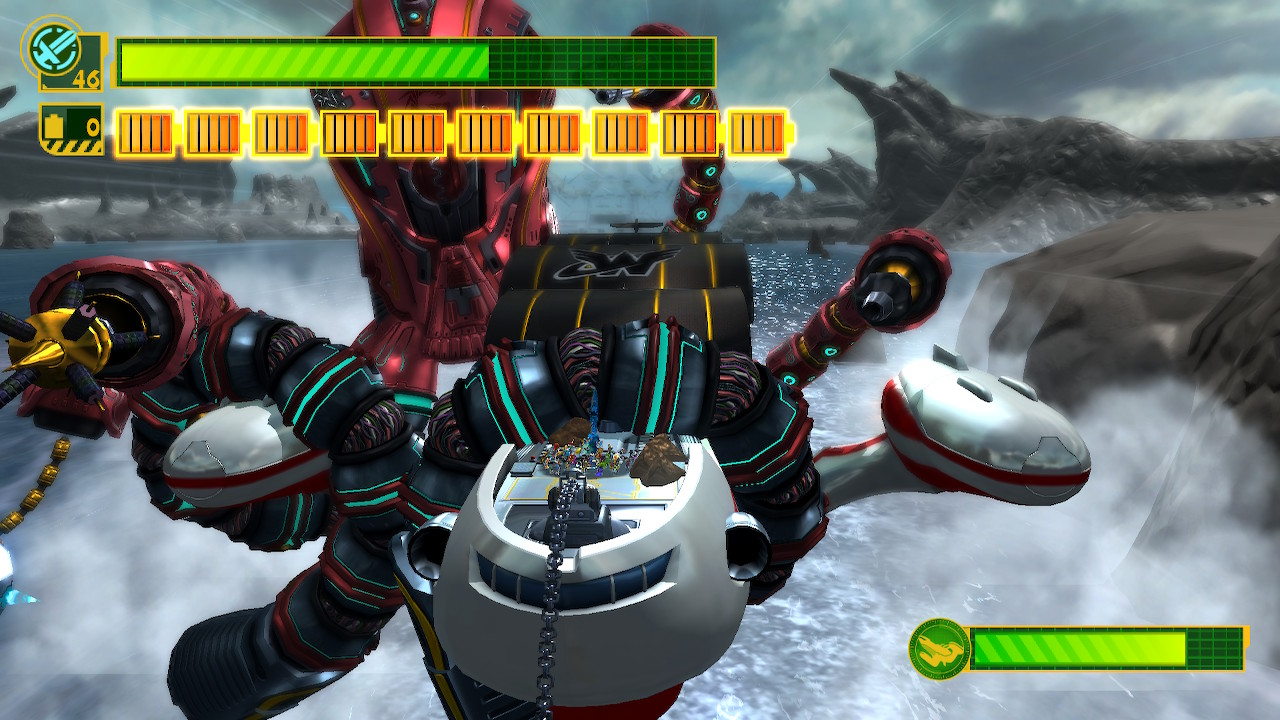 If you are a fan of Bayonetta, Astral Chain, Viewtiful Joe, and the other action games from PlatinumGames. I highly recommend The Wonderful 101: Remastered. With a lack of Switch games coming out this year and it’s discounted price tag there is a reasonable offering here. This is a video game’s video game. If you are looking for a deep AAA experience or have already played this on the Wii U, The Wonderful 101: Remastered won’t be offering you anything new. If you are a PlayStation consumer and would like to get a chance to check out this Wii U game I would start with the Vanquish and Bayonetta double pack that just came out.