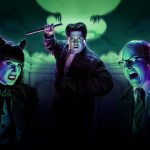 The horror-comedy show What We Do in The Shadows has been renewed for a third season on FX. The vampire based comedy comes to us from Taika Waititi and Jemaine Clement. The show is based off the 2014 movie.

Due to the COVID-19 pandemic no word on when the third season will begin production. Certain movies have started back up in New Zealand, so it looks like the rest of the entertainment industry will begin to work again in the next few months.

In other news it seems that we finally get to see Darkseid in the upcoming Snyder cut of Justice League. Check out  Jason McKendricks article dealing with the actor behind the voice. Minecraft Dungeons is coming out next week on multiple consoles. Our own Jared Eden crushed an article detailing a secret level dedicated to Diablo 2.