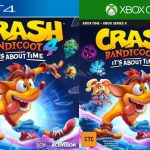 In a time when E3 would just be winding down normally. We have shifted to a brand new endless stream of news and rumors. With every publisher and developer having their own showcase it is often hard to keep up. In the past few months rumors have been heating up that Crash Bandicoot would be getting a brand new game. After the success of the Crash Bandicoot N’Sane Trilogy, it would only make sense for Activision to capitalize on a Crash Bandicoot 4.

Today, the Taiwan Digital Game Rating Committee has rated Crash Bandicoot 4: It’s About Time for Xbox One and PlayStation 4. This was originally discovered by the website Gematsu, a well-known source for discovering these leaks and ratings. Within the leaked rating page we got a brief synopsis of the upcoming game. As well as our first look at the cover art for the game.

Crash is relaxing and exploring his island in his time, 1998, when he finds a mysterious mask hidden away in a cave, Lani-Loli. The mask is one of the Quantum Masks and apparently knows Aku-Aku, Crash’s mask friend! With the Quantum Masks returning and a Quantum Rift appearing near our heroes, they decide to bravely head through to different times and dimensions to stop whoever is responsible.

We will no doubt be hearing about the official upcoming announcement of Crash Bandicoot 4: It’s About Time in the coming weeks. With only a matter of time before official word of when we could expect to see new information. This is a very exciting time for long time fans of the mischievous Crash.
Source
Facebook Twitter Google+ LinkedIn Pinterest Tumblr
Previous article Everything From EA Play Live 2020
Next article Injustice: Gods Among Us Is Free On Xbox One Via Backward Compatibility