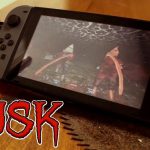 You are reading
Dusk Is Coming To Nintendo Switch This Halloween

Dusk is a retro-styled FPS from New Blood Interactive. The game harkens back to the days of Doom, Hexen, and Redneck Rampage. The game originally launched back on PC in 2018 to critical acclaim from reviewers and fans. While there have been many memes and jokes made by Dave Oshry of New Blood of the game coming to Nintendo Switch. Today, we learned that the Switch port is real and it is coming.

During the Guerrilla Collective Livestream today, we got our first official look at the Dusk Nintendo Switch port. In a short 18 second trailer which simply shows the game running on an undocked Nintendo Switch. The reveal could not have been more on-brand for the for New Blood. The game will officially be coming to the Nintendo e-Shop on Haloween 2020. If you missed this game on PC, I highly recommend checking it out. Especially if you are a fan of old school FPS games of the early ’90s. I have written at length about Dusk which you can find here.

Will you be checking out Dusk on Nintendo Switch? Let us know in the comments and don’t forget to check back for the latest gaming news and information.