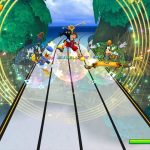 You are reading
Kingdom Hearts Melody of Memory Launches 2020 On PS4, Xbox, and Switch

Square Enix dropped a few surprising announcements for Kingdom Hearts fans on Tuesday with a new rhythm game and updates for the series’ future.

The first reveal came in the form of a two-minute trailer showing off Kingdom Hearts Melody of Memory. The latest title follows in the footsteps of Square Enix’s Theatrhythm Final Fantasy, a rhythm game featuring Final Fantasy music. According to fansite KHInsider, Melody of Memory will include over 140 songs and four gameplay modes from the series’ rich musical history. By the looks of it, different characters will be available to play as depending on stages. The game will also feature an online mode, possibly for some player versus player action.

You can catch a glimpse of the game in motion through the official trailer:

And of course, expect the main narrative of all the games to be tied to this rhythm game. The last 40 seconds of the trailer give snippets to events following Kingdom Hearts III Re Mind. The bits highlight Riku, Kairi, and their advancements in trying to find Sora.

The Future of Kingdom Hearts

In the Kingdom Hearts 2020 trailer, you can get a peek at what Square Enix has planned for the next saga in the series. Dubbed as Phase 2, the first slot filled in is KHIII Re Mind, the DLC released in January. The second slot is Kingdom Hearts Dark Road, the expansion to the free-to-play mobile game Kingdom Hearts Union X. Melody of Memory fills in the third slot, and two more are left blank. 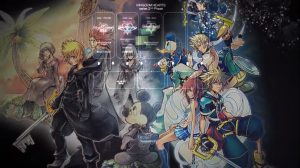 Square Enix Japan’s official Twitter also announced Kingdom Hearts Dark Road will be launching on June 22. The game is set in the keybalde-training days of the series’ antagonist Xehanort. Rather than using medals during combat like in KHUX, Dark Road will be using cards. See more below:

The Lord’s Word: As a hardcore KH fan and lover of its music, I’m split. Fans, including myself, have been wanting a KH rhythm game for years. It’s a perfect fit considering Square Enix has hosted three worldwide concerts for the series (two of which, I attended). So, of course, I’m going to buy it! Slight hesitation comes in knowing it would be tied to a story… Even after all these years, it seems like Nomura can’t help himself. He’s putting Kingdom Hearts into the same story structure predicament that started with Chain of Memories on Gameboy Advance.