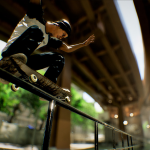 You are reading
Session Grinds Into Xbox Game Preview

creā-ture Studios upcoming title has finally hit Game Preview for Xbox. Session, described as “the most realistic skateboarding video game ever,” is finally available. The game was announced in a Kickstarter campaign and showcased at Xbox E3 2018. The game entered the ID@Xbox program and was one of the first modern skateboard games announced. While Tony Hawk is on the horizon, Session looks to fill that void and win your heart. The game is available for $19.99 USD with a trial period as well.

I did have some trouble finding the game through surfing the store. However, after searching the name Session and heading to the Games section, it was able to be purchased and/or downloaded for the trial time.

The game is also available on Steam’s Early Access program as well.

This should be a most welcome addition to the genre that has been without a solid game in years. Earlier this year, Activision announced plans for Tony Hawk 1 & 2 to be remade in modern times as a hailed throwback. Many, including myself, have been waiting for a game like Session to finally make its way into our gaming libraries.

SESSION on XBOX is available now in Xbox Game Preview!

Welcome Xbox players, hyped for you to drop in!! pic.twitter.com/BS9ZpFNLgs