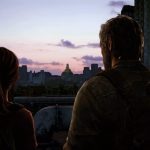 You are reading
The Last Of Us: A Retrospective Look At A Classic

The Last of Us Part II is most likely the most highly anticipated PlayStation 4 game of this generation. There is no hyperbole in this statement. As social media and marketing numbers for the game are absolutely massive. After all, this is a sequel to a game that many consider to be one of the best games in the past decade. In celebration of The Last of Us Part II’s launch. Join me for a look back on what made The Last of Us so special in 2013.

Right off the bat, I may say something controversial. The story in The Last of Us is not groundbreaking by any stretch. Up till its release, we had seen many games that had tackled the post-apocalyptic subject matter before. To be honest, by 2013 the “post-infection apocalypse” genre of both games and films felt played out. The brilliance of The Last of Us, however, is that it managed to make it feel different. This seems like a very vague statement. How can something tread the same story paths of many other forms of media but still be unique?

What makes The Last of Us really shine and so memorable is its host of characters. The interplay relationship between Joel and Ellie is so human. What I mean by this, is often in film and games relationships just feel so unlikely. People suddenly forgetting their differences at the end of a game to fight the common evil. Or interactions don’t feel natural, such as characters being scared of combat. Then 2 hours later they are cold-hearted killing machines. The introduction to The Last of Us showing the loss of Joel’s daughter sets the tone for the entire game.

Darkness Versus The Light 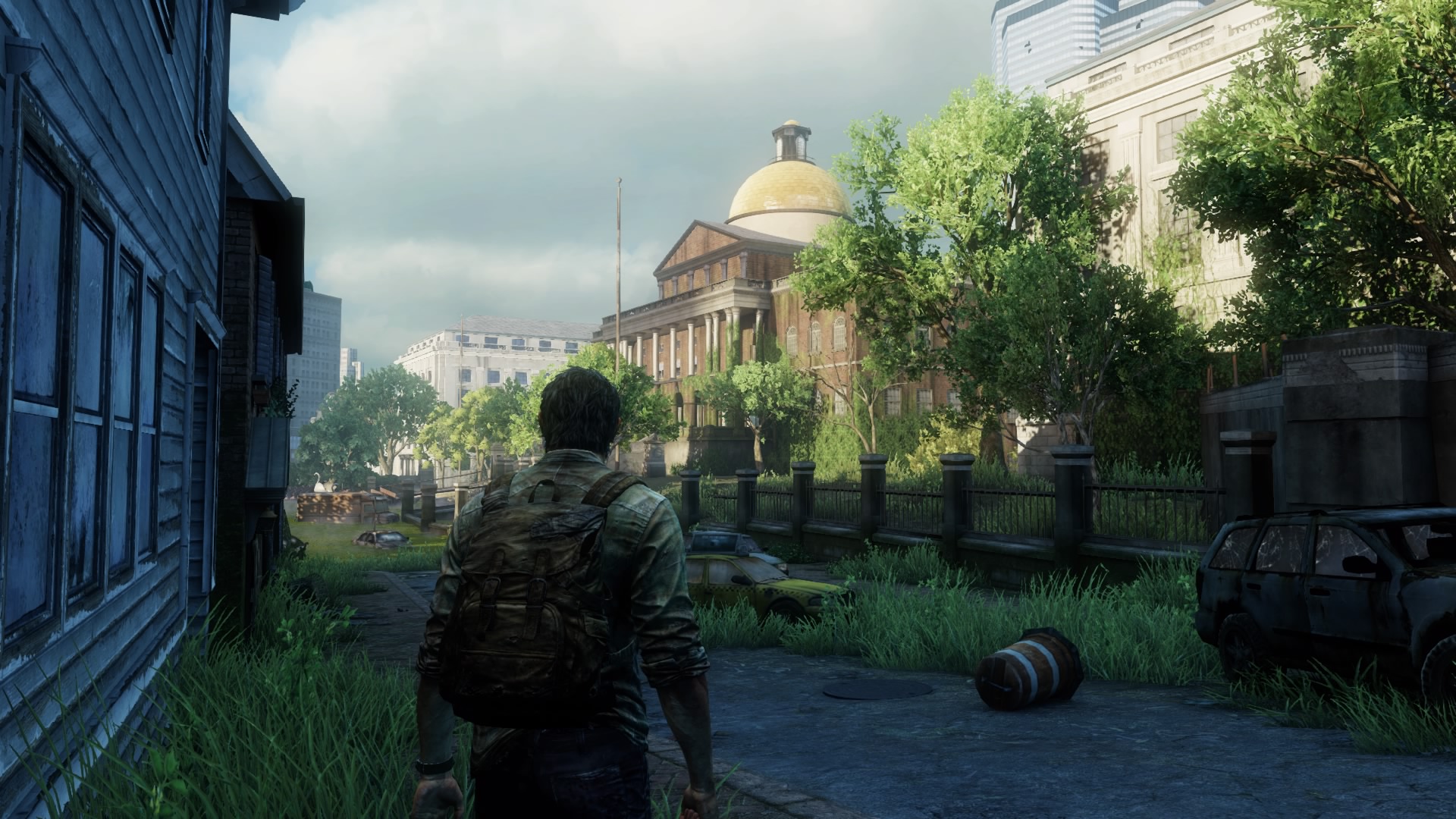 Joel spends much of the game feeling pained by the loss of his daughter. As a father of two daughters, I understand this feeling. I could not imagine losing either of my daughters, especially to have one of them pass away in my arms. You see very early on in the game, that Joel has sealed himself off emotionally from the world. He tries his best to stay at a distance from those around him. Whether it’s Tess or Ellie early on, he tries his best to remain unattached. However, it is weaved into the fibers of how we function for us to attach ourselves to those around us.

While The Last of Us is predominantly filled with dark and heart-wrenching moments. There are small intervals between that really deliver some impactful moments. One of the first moments that really hit me in regards to this was when Joel and Ellie begin their road trip after Bill helped them procure a vehicle. You had just finished leaving behind Bill who had just found out that his partner had committed suicide after leaving him. A truly uncomfortable moment, which immediately is countered by the cutscene within the truck. Ellie puts on a tape cassette of some old music and acts in the most basic sense like an average teenager. This is also the first time we see Joel really seem to have any attachment to Ellie’s well being outside of core survival.  Its heartwarming moment, that is abruptly ended by a bandit raid that destroys their truck and puts a huge hitch in their plans. Setting this very personal moment between two very tragic moments. It makes those small personal character-building moments hit on a much deeper level.

Survival At What Cost?

In a world full of clickers and bandits, self-preservation would be the first thing on many people’s minds. This certainly seems to be Joels main concern after the death of his daughter. However, we see him waver when Tess is bitten and offers to stay behind so he and Ellie can escape. Joel wavers here, no doubt not wanting to abandon his partner. But in the end, his survival instinct takes hold and he takes Ellie and flees leaving Tess to die at the hands of government forces.

This survival instinct goes out of the window when the game hits its intense ending. Joel is willing to risk his very last breath to save Ellie. There is nothing else on his radar. The danger, the risk, the fact that, with Ellie, the doctors might have been able to find a cure? Gone. Joel cared nothing else other than saving Ellie, this goal was caused by the connection that he had developed with her. It was not a sexual connection, but one of a father and care keeper. After Joel’s failures to protect his own daughter. Deep down he could not let that happen again. No matter the cost, whether it was the lives of the doctors and guards. Or the entire remaining population of the human race. He would sacrifice everything for Ellie.

Evil In The End 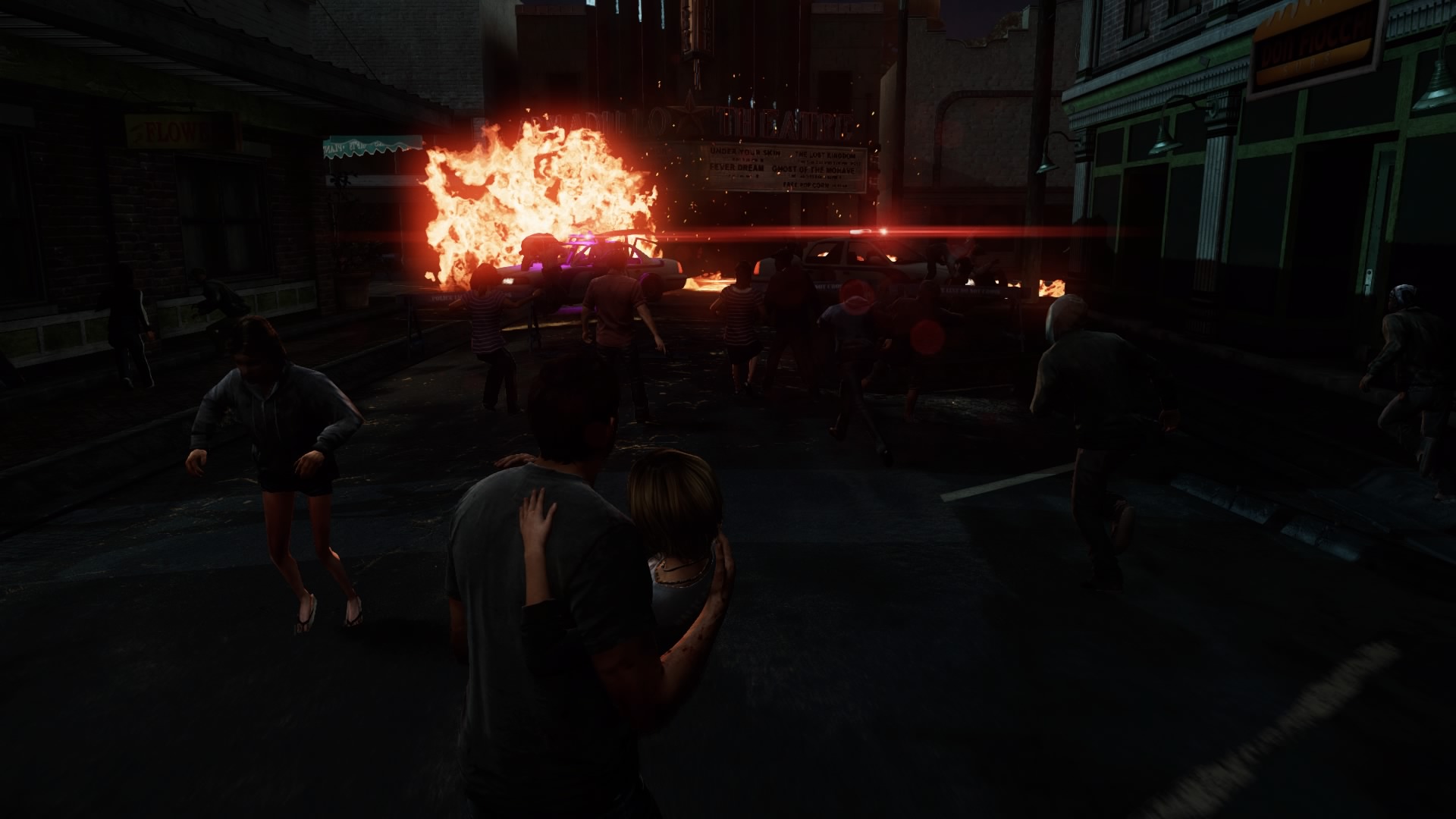 The entire time you are playing The Last of Us you feel like you are playing “the good guy”. All these emotional and heartfelt moments shared with Ellie throughout, make you feel like at his core Joel is a good person. But at the end of the game, you are the villain. The last hour of the game is nothing short of a bloody murder spree, all to regain possession of a girl. A girl who Joel has emotionally replaced his daughter with. It is unhealthy, and Joel spins out of control. Leaving the player feeling gutted, it truly is a gut-punch of an ending.

One may assume that Uncharted and The Last of Us would play almost identically. As they came from the same studio, as well looks fairly similar in their third-person action design. However, one of the most shocking things about the game is how completely different it feels in comparison. While it shares some similarity at its core, The Last of Us feels much more grounded (insert groan here). What I mean by this, is the combat feels much more weighted and less floaty. Aiming down sight requires precision, and melee combat feels like a boxing game. As each hit is met with visual damage and a loud bone-crunching sound.

This damage is no better shown than when you take damage yourself. Typically in action games, when you take damage your avatar will very rarely even flinch aside from a little bit of aiming sway. In The Last of Us if you get shot, especially with more powerful weapons you will likely be knocked off your feet and Joel will claw his way back up. When you are low health, Joel is limping and breathing is labored truly showing the depth of damage his body is taking. Very few games do this sort of damage to the player character, and it felt incredibly ahead of its time in 2013. 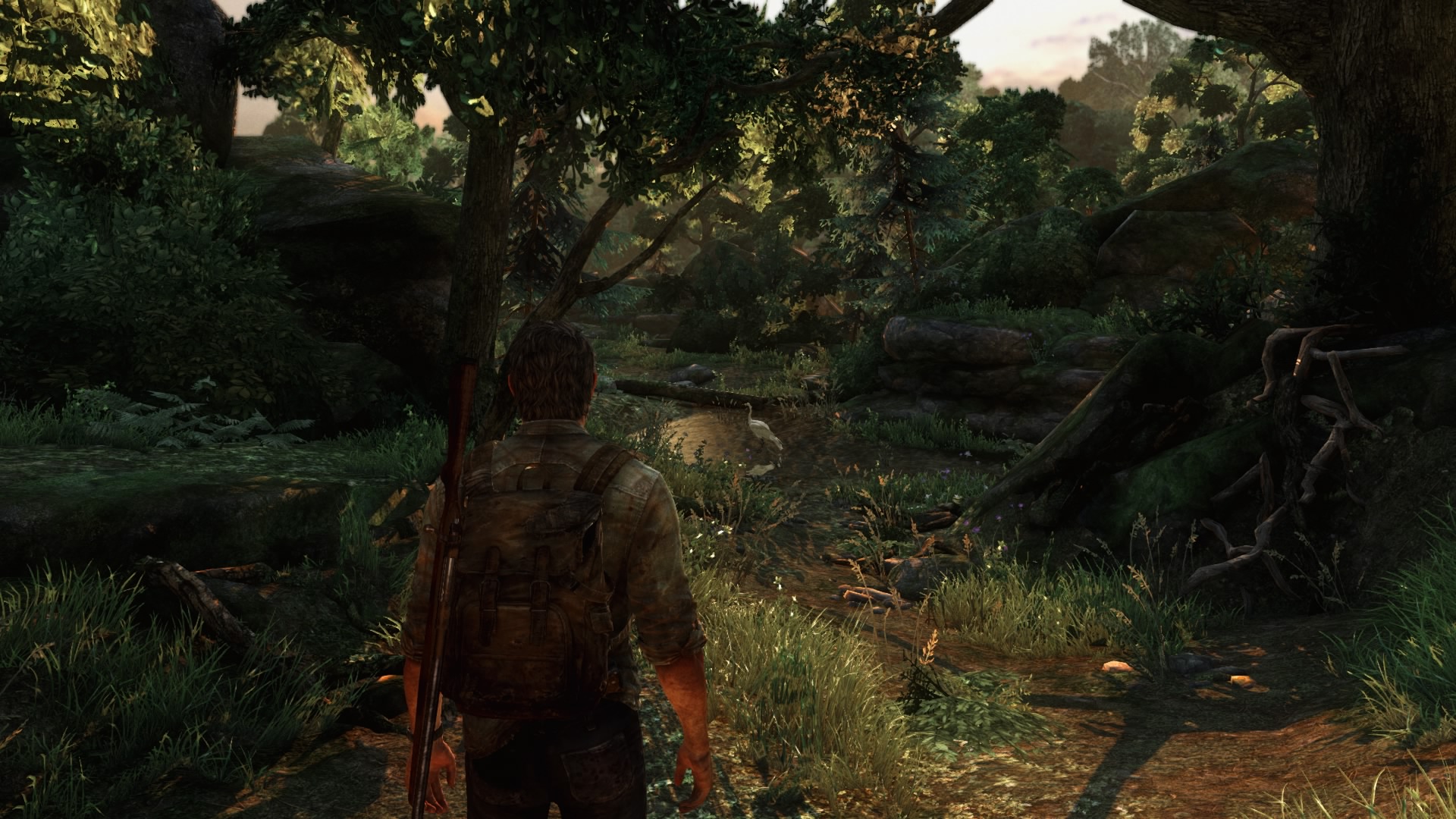 Often difficulty settings in a game are simply that, an increase in the challenge within the game. Often many games simply give the enemies more health and make the player’s health pool smaller. However, great games find a way to make these difficulty levels truly have meaning. The Last of Us does this exceptionally well. If you play the game on easy or normal difficulty. You will find plenty of ammo, crafting material, and weapons to blast through and slaughter your enemies. It makes the Last of Us feel like an action movie packed with a very dynamic story.

Now crank up the difficulty to Survivor or Grounded and the game changes. Suddenly every bullet counts, and when I mean every bullet. I mean absolutely every bullet. You will be surrounded by three clickers and have one pistol round, hoping to god that you don’t get found. The game becomes quickly more about resource management and planning your actions down to every single encounter. Stuck in a particular spot? Instead of crafting a medkit maybe craft a Molotov instead to soften up enemy resistance. These two very unique play styles play into why this game has found such a wide audience. It appeals to the most casual player, while also catering to those that chase that challenging experience. 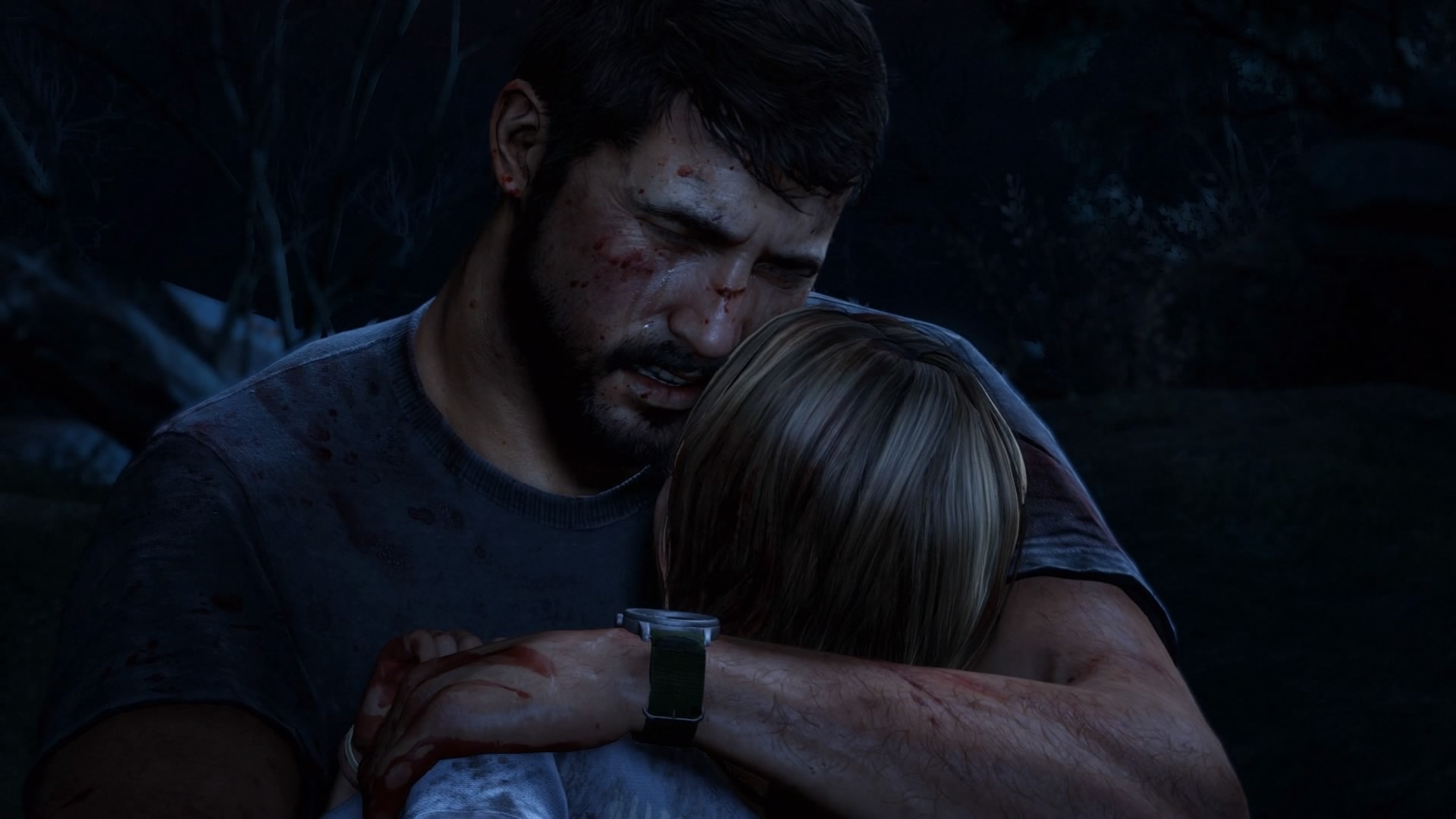 I am one of the last people that sets graphics up on a pedestal. However, in 2013 The Last of Us and Bioshock Infinite set the bar high. Especially considering both were developed for the Xbox 360 and PS3 generation. The game has some of the best character model designs of the last generation. The attention to detail from each melee strike to the facial expressions as characters experience happiness or grief. These models were only the vehicles for the amazing performances that the cast delivered.

There are no “dead” performances to be found within The Last of Us. The interplay between Troy Baker (Joel) and Ashley Johnson (Ellie) is phenomenal. The amount of character growth that is portrayed in just over 15 hours of the game is impressive. The game’s writing is good, but it is taken to new levels by the voice acting cast. While many have applauded the writing in The Last of Us, which is great. I truly think its how it is delivered that makes it so special.

I think that’s one of the reasons The Last of Us resonates with so many people. While there has been no shortage of games with immersive experiences and stories. Bioshock, Mass Effect, Spec Ops The Line, Red Dead Redemption, and more were huge. They delivered huge and immersive worlds built in the AAA space. While we often lament that AAA has become stagnant in recent years. The last generation which ended with The Last of Us truly was some of the best storytelling in gaming and was some people’s first experience with a story of that level. This means it holds a special place in many of the hearts of its fans.

While other games have surpassed The Last of Us in terms of both its storytelling and its game design. With the release of The Last of Us Part II to almost cap off this generation, it almost feels symbolic. There is no doubt a lot of pressure riding on Naughty Dog to deliver. With fans being able to have their hands on the game within the next 24 hours. The hype level is through the roof. I thank you for joining me in my discussion of The Last of Us. I wish the entire team at Naughty Dog the best, as they do the final tweaks all the way until the game launches.