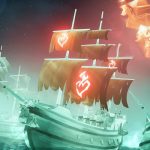 You are reading
Haunted Shores Brings in Ghostly Ships

Move over Skeleton Ships, the real Ghost Ships are here. Almost two years after Sea of Thieves originally introduced NPC controlled ships, Ghost Ships are coming today in Haunted Shores. This update is massive and is arguably the biggest update since last year’s Anniversary Update. There’s so much here, the update video couldn’t even cover all of the patch notes. This has new gameplay features that tie into the lore, accessibility features to make it easier to communicate with your crew, and new live events for all players to enjoy.

Captain Flameheart is Sending his Fleet

Sea of Thieves long-time shadow, Captain Flameheart, is sending his fleet from beyond into the game. In short, these ships sail faster, hit harder, and use more tools than a Skeleton Ship. Two examples include the Wraith Cannonballs, which puts multiple holes into a ship with each shot, and Phantom Mines, which are ghostly Powder Kegs. This event ends with Flameheart’s flagship, the Burning Blade. Crews who complete this event will get spectral-looking loot, the aforementioned Wraith Cannonballs, and the Burning Blade’s sails as a cosmetic option.

Crews can also buy ghostship encounters from the Bilge Rats or the Order of Souls. These give players a less extreme Ghostship battle when they want them, and another reward. One of the treasures these encounters drop is Captain of the Damned Skulls. Once a player turns in enough Skulls, they’ll get the Ghost Captain sails.

There’s Not Just Haunted Shores, but Cosmetics, Events, and Music Too

The Pirate Emporium, Sea of Thieves’ microtransaction store, has a number of new emotes and ship sets. These emotes include a free, shovel-balancing emote, as well as dancing and hiding emotes. In terms of ship sets, the Blighted ship set is now fully available, from capstan to wheel to Collectors’ sails and figurehead.  Pets also get new cosmetics. Some are based on the Ghost set for Pirate Legends, and others just make them completely gold.

Much like the stalk market, get ready for more rewards with great timing. Haunted Shores is adding new events, Ashen Expeditions and Shark Hunt. Ashen Expeditions are every Tuesday, where all Ashen loot is worth double gold. Then, Shark Hunt starts on June 24th. This event revolves around hunting sharks and Megalodons. Turn their cooked meats into the Hunter’s Call faction, and you’ll get bonus gold and reputation.

Finally, cycling shanties to find the right one is a thing of the past. This update introduces the Shanty Radial, where you can pick the specific shanty you want to play. These shanties include the classics, like Becalmed, and new tunes for players to hear upon hopping into the game today.

This is the most talked-up change from Haunted Shores. Rare Ltd. was so focused on this change they dedicated an entire blog post separate from the patch notes. First of all, for console players, the communication wheel is remapped to the Right Bumper (RB) button, and the quest log is now a part of the Equipment Wheel on the Left Bumper (LB) button. Next, specific messages are grouped into various categories, like Alerts. These updates hope to further improve accessibility in the game and prevent gameplay friction.

Facebook Twitter Google+ LinkedIn Pinterest Tumblr
Previous article New Pokemon Snap and the Rest of Pokemon Presents
Next article The Last Of Us: A Retrospective Look At A Classic