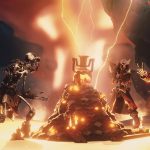 Remember back in 2018 when Sea of Thieves had two bosses between the Skull Fort Captains and the Kraken? Ah, good times. I mean it’s not like the list grew much since then. Rare only added giant sharks, skeleton ships, some Tall Tale bosses, a pseudo-Raid boss, ghost ships, each with different variants of themselves…right? Oh who am I kidding, Sea of Thieves has a wealth of bosses added over its two-year life span, and I’m sure I missed at least one or two with that list. The newest update, Ashen Winds, focuses on bosses again, this time adding *check notes* Captain Flameheart’s fire-breathing generals? Gulp.

If you follow Rare Ltd. or Sea of Thieves on Twitter, you might see a swirling red tornado on your timeline. Those are the Ashen Winds where the Sea’s greatest foe, Captain Flameheart, sends his generals to fight pirates. They include Old Horatio, Warden Chi, Captain Grimm, and Red Ruth. Each general uses fire and ash-based abilities to take down other pirates. These attacks range from clouds of ash, flaming breath, an explosive ground pound, or the meteor-storm summoning Roar of the Devil. I cannot stress this enough, shoot them from afar. Do not try to fight them with swords. You will die. A lot.

Such a great challenge also deserves a great reward. Longtime Sea of Thieves players will know exactly what to expect: Ashen Loot! Ashen Loot, introduced way back in the Forsaken Shores update, is rarer and more rewarding versions of the same loot you’d find in the world. This update also adds the Ashen Winds Skull. This skull doubles as loot and a flamethrower. However, the more you use it as a flamethrower, the more its value depreciates. Further, this Skull does have a set ammo limit that does not recharge or refill. Be mindful of how much you use it if you want its loot.

For further details on this update, check out the official patch notes.

Cuphead Has Appeared On The PlayStation Store