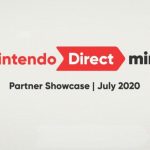 You are reading
First Nintendo Direct Mini of the Summer Announced

Nintendo just announced the first of what seems to be multiple Nintendo Direct Mini events throughout the summer.

The first one will stream today July 20 at 7am PT/10am EST. Check out the announcement tweet here and below:

On 7/20 we'll debut the first #NintendoDirect Mini: Partner Showcase, a series focused on titles from our development & publishing partners. We'll share a few updates on a small group of previously-announced #NintendoSwitch games. Check out the full video release at 7am PT. pic.twitter.com/GbEbxVL6fD

According to Nintendo, the event will showcase previously announced titles for the Nintendo Switch. This appears to be the first of multiple Nintendo Direct Minis based on the wording of the tweet. So, expect to hear more from Nintendo throughout the summer.

See More: Chucky is Coming to the Small Screen

Nintendo opted out E3 a long time ago and was one of the early adopters of internet streams to announce news their upcoming titles to their loyal fanbase.

Are you excited about this abrupt Nintendo Direct Mini? Sound off in the comment section below. And be sure to tune into the Iron Lords Podcast and Lords of Gaming for all the latest gaming news and analysis.