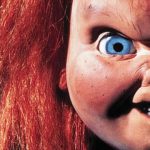 You are reading
Chucky is Coming to the Small Screen

Chucky is making a comeback in a small way. SyFy and USA have announced a new show that will be based on the original character. This show has nothing to do with the rebooted movie that was recently released.

The show is supposed to go back to the movie’s original 80’s horror roots. It looks like we will be getting some more 80’s love when the show airs. You can see the teaser trailer below. It’s not stated how the show will split up its time on either network. There’s nothing wrong with more Chucky.

The rebooted Child’s Play movie was released last summer on June 21st. It featured Mark Hamill as the voice of the title character. The movie grossed $45 million worldwide, a healthy amount of money given the budget of $10 million. It was discussed that fans would be getting a second movie, that is until the pandemic hit. At this point, we should be happy to see the news about the upcoming Chucky show.

Here at Lordsofgaming.net, we take pride in our reviews. Here is our most recent review for The Last of Us Part II.We cover news that spans gaming and entertainment like the recently announced Star Wars show. Or you may have seen the new trailer for the newest No Man’s Sky update.