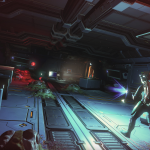 You are reading
No Man’s Sky Introduces The Desolation Update

No Man’s Sky has officially received a new and very curious update. The Desolation update looks to bring a completely new style to the game, giving a very eerie and creepy vibe.

The new update is quite meaty and takes the game in a new, yet welcomed, direction. Players can expect the following new features in the Desolation update:

The trailer to the Desolation update looks to bring a darker, more sinister play. What appears to be alien eggs and habitats gives the sense that inspiration has been taken from games such as Dead Space and even the Flood from Halo. What is best about the update is that it is absolutely free. Currently, you can even play the game if you are an Xbox Game Pass subscriber.

The last update even introduced cross-platform play, so you can play with literally anyone across multiple platforms. Cross-platform will help maintain a healthy player base in No Man’s Sky for years to come.

Hello Games have come a long way since they first launched the game way back in 2016. In fact, they took criticism well and kept improving the game steadily over the past couple of years. It’s become one of the comeback stories of the current generation and set a standard that other titles have emulated. Will you be trying out the new Desolation update in No Man’s Sky?