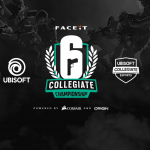 Schools can nominate one team (per school) to participate in this championship. Teams will have a chance to win a $30,000 prize pool. As well as additional hardware prizes, including a cutting-edge Origin PC and CORSAIR peripherals. This is a wonderful opportunity for students who really want a shot at the big leagues. Earlier this year there was also an announcement by Ubisoft where the North American League had a re-launch. They added a league for Canadian players (finally!) to compete in, among many other notable changes. That have improved the overall health of the Rainbow Six Siege E-Sports community.

This new league will be in partnership with an online competitive platform named FACEIT who will operate the program as apart of the North American ecosystem. The Collegiate Esports League will also be sponsored by Corsair and Origin PC, a subsidiary of Corsair. The pre-season begins in October 2020, with the full season happening next year on January 2021.

What do you think of the new R6 Siege Collegiate E-Sports League? Let us know in the comments and don’t forget to check back for the latest gaming news and information.