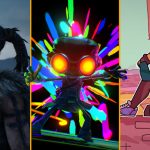 You are reading
Exploring Mental Health Through Game Design

The exploration and representation of mental health in video games are constantly improving. In years gone by the closest exploration, we would get is through a mad scientist. A throw-away justification of a villain’s actions. While these were early steps, they could also be seen as damaging since they portray individuals with mental illness as a threat to society rather than themselves.

Thankfully, video games are much more mindful now of how to approach the topic. Over the last decade, games have tackled real-world issues, including social and mental ones, with more thought and respect.

With this, video games have shown the powerful role they can play in regards to mental health. They can offer an escape and a moment of respite. Help people heal, reflect, and feel less isolated. Provide a way for people to express their suffering to loved ones, helping increase the understanding others have of one’s challenges.

“Games, in a really unique, only to games type way, lets you play in situations that you might have a great fear or anxiety about, but you can do it in a safe situation. You can always turn off the TV, you can always put the controller down. I’m not saying that games replace therapy, but I think they can be a positive thing in people’s lives, particularly for people who might have a lot of barriers to trying those other solutions.” – Tim Schafer, Double Fine

Breaking the Stigma Through Game Design 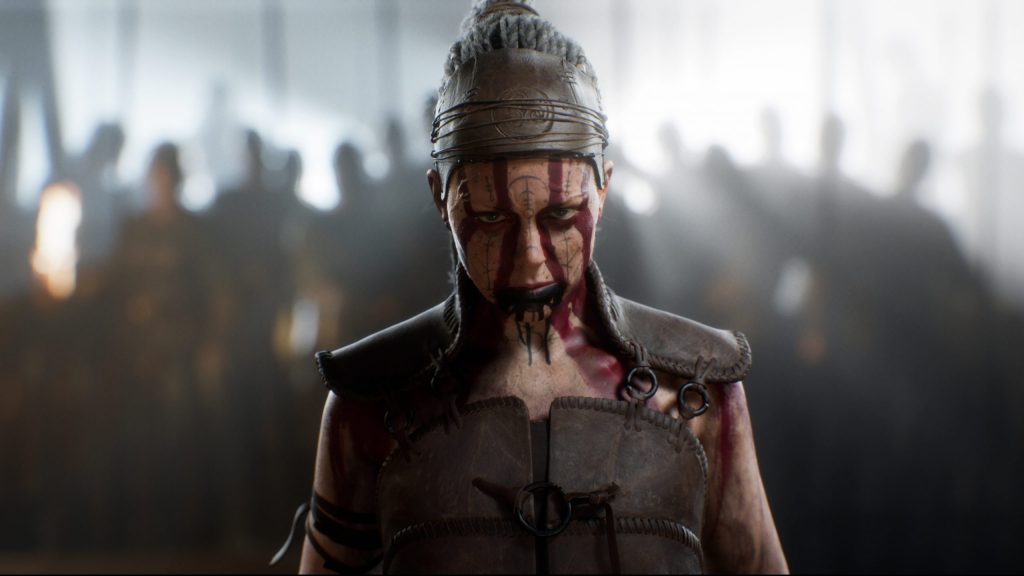 With each passing year, games are helping break the stigma surrounding mental health in society. Opening up more avenues and opportunities for discussion and allowing the voices of people suffering from mental issues to be heard.

However, some games take further steps than others. While the majority of games that explore mental health currently do so at the narrative level. While others explore the subject through their gameplay and design too. Here we are going to look at three games that do just that.

This year’s Psychonauts 2 set a new standard for mental health representation in video games. While Double Fine never intended to make such an impactful statement with the original Psychonauts, it has become one of the staples that the series is known and loved for.

The platformer sees players take on the role of Raz as you explore the minds of villains, fellow psychonauts, and janitors. This premise not only allows for the stunning variety in level design you see in Psychonauts, but it also opens up more opportunities to represent and raise awareness of mental health and its different states within the gameplay itself. 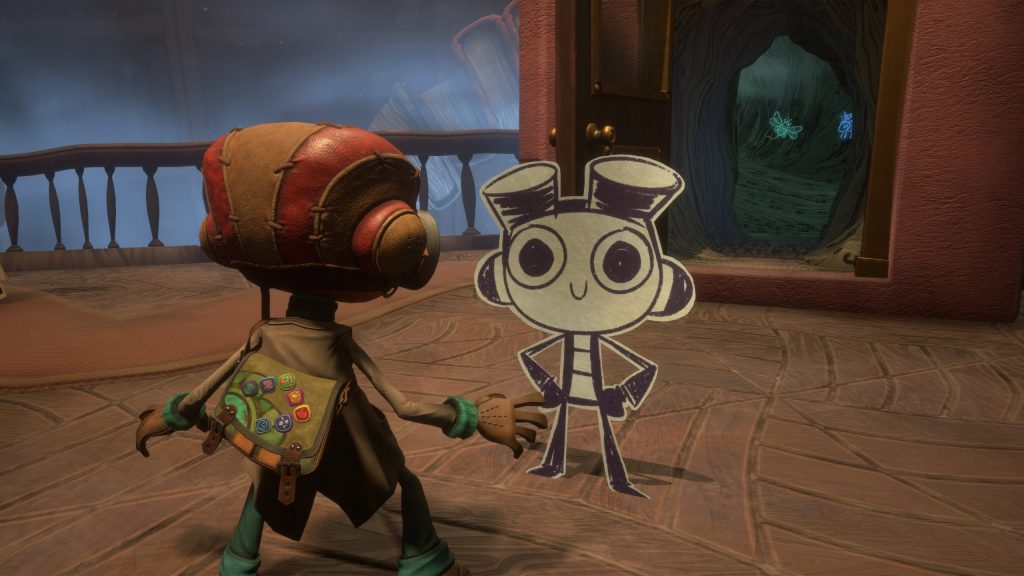 Showing Care and Empathy Towards Every Person

Every person is different and that remains true in Psychonauts 2. One level could see you exploring the depths of someone suffering from self-doubt, addiction, and substance abuse. Another focuses on a character’s feelings of isolation, neglect, and depression.

We also see mental health represented through the game’s enemies and combat too. One example is the panic attack, a new enemy encountered in Psychonauts 2. Panic attacks are represented as fast-moving creatures making them hard to pin down. They will often duplicate themselves too which can find you very quickly overwhelmed by the panic attack’s onslaught.

So how do you tackle these panic attacks? You gain the ability to slow down time. This in turn slows the panic attack’s frantic movements and allows the player to ease themselves and focus on the challenge in front of them. 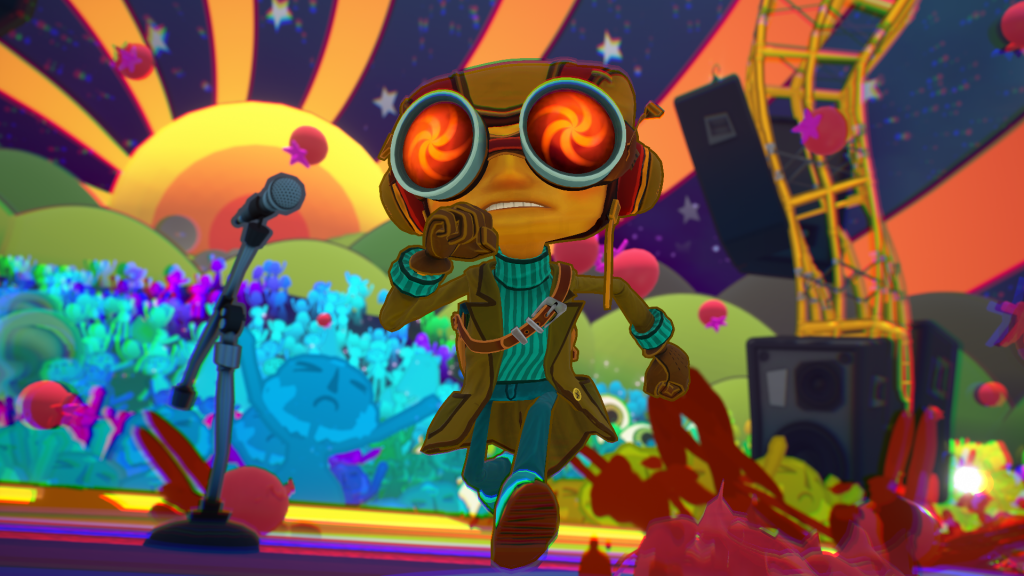 It is not just the fact that Psychonauts 2 tackles these subjects though, it is the care and empathy they show throughout regarding each area that makes it a true standout game. They never judge or depict someone’s mental struggles in a bad light.

To ensure they approached the subject with the highest of care and inclusion. Double Fine utilised a number of resources whilst researching. This ranged from consulting with experts such as doctors and psychologists to using their own experiences of mental health.

When Cambridge-based studio Ninja Theory released Hellblade: Senua’s Sacrifice in 2017 they had two goals. The first, to create what they called an “independent AAA game”, a game that features all the production values of a AAA game but with the creative freedom of an indie title. The second, to produce a game that can help raise awareness of psychosis, a condition that has not had much of a presence within video games in the past.

Similar to Psychonauts 2, Hellblade: Senua’s Sacrifice was not always as focused on mental health as the final release. It was during development that Ninja Theory realised the opportunity they had created. To be able to explore psychosis through game design and provide insight and understanding only possible with video games.

Hellblade: Senua’s Sacrifice puts you in the shoes of Senua as she journeys to Helheim. During the adventure, players will face many challenges. From puzzle-solving to defeating other worldly creatures in combat. All while dealing with Senua’s psychosis. 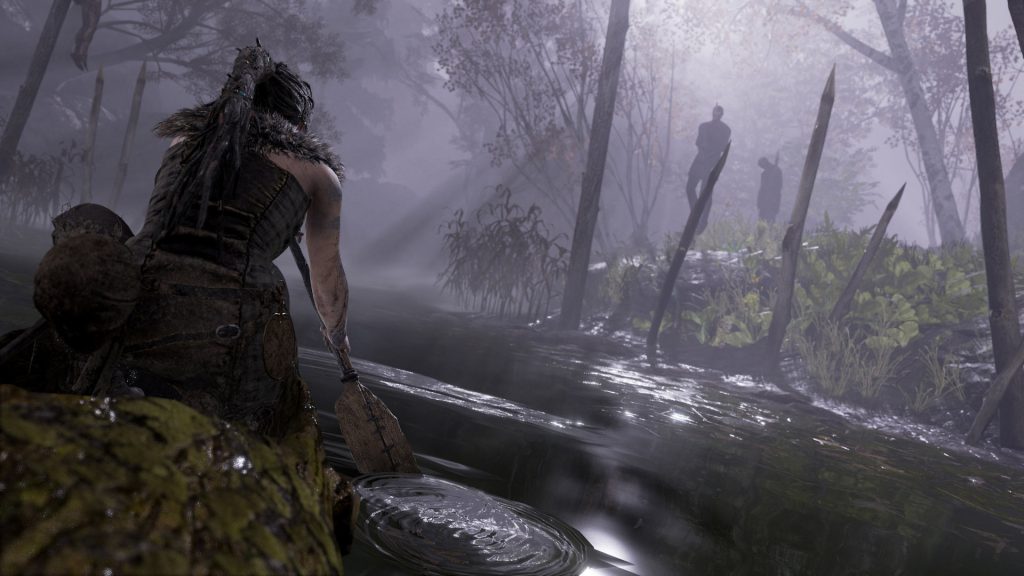 This psychosis is represented through gameplay in several ways. Visually, Senua hallucinates many objects within the world leaving you constantly battling with what is and is not real. Are there truly monsters lurking in the shadows? Do these symbols that pierce colour through an otherwise grey world contain a deeper meaning? Are they even there? These questions linger in the player’s head just as they do in Senua’s throughout the game.

As well as visual hallucinations, Senua’s mind is also the home to several voices that are ever-present during the journey. These voices can act as a guide, a comforting aid that warns you of an incoming attack from behind. On the other hand, they can plant seeds of doubt. They will hammer in the message that you are heading in the wrong direction, that you are not up to the task, and that one false move will bring forth your demise. Progression through the game becomes more about learning to accept and live with the voices rather than banishing them altogether. 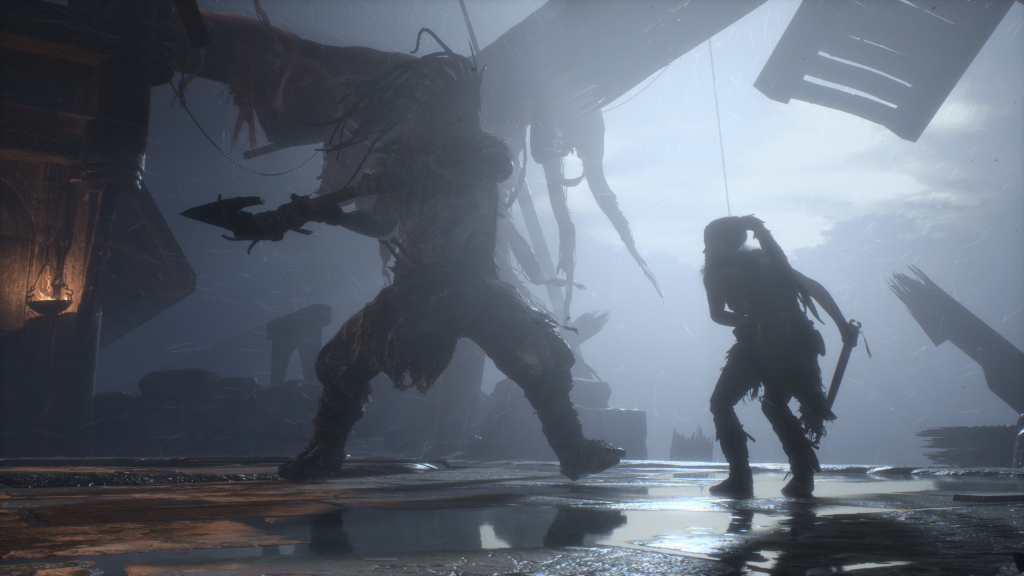 In order to accurately and respectfully represent psychosis, Ninja Theory reached out for advice from both experts and people with the condition. It was these collaborations that helped shape how the condition is represented through both the gameplay and Senua’s personal story and traits.

Ninja Theory has not just stopped at Hellblade: Senua’s Sacrifice, however. As well as a sequel currently in development, they are also working on The Insight Project. Developed in collaboration with Professor Paul Fletcher of the University of Cambridge, The Insight Project aims to generate strategies to alleviate mental distress through the use of game design and clinical neuroscience.

Signs of the Sojourner

One of the benefits indie games hold over AAA titles is a smaller scope can allow developers to hone in on and focus on a single mechanic. Entire games can be built upon a specific design or experience without the need for other supporting pillars.

The creative freedom afforded with indies also enables developers to explore avenues of game design that carry more risk. Whether it be due to the more niche style of mechanics appealing to a smaller fanbase or because the systems in play would not translate well into a larger scope.

These are two benefits that Echo Dog Games took advantage of when creating the wonderful Signs of the Sojourner. Unlike the previous two games, the main focus of Signs of the Sojourner’s is not necessarily mental health. Instead, it examines the social aspects of life and communication. However, a by-product of that is enabling the exploration of mental conditions that can often be tied to social aspects. Conditions such as anxiety, depression, isolation, and grief. 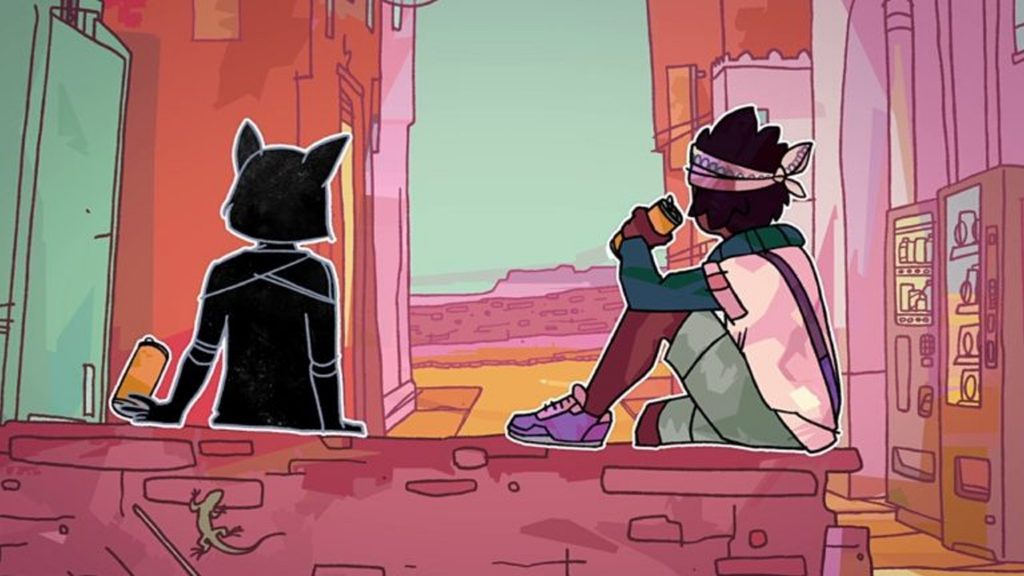 Signs of the Sojourner is a narrative-focused deck-building game. As the player, you are tasked with traveling across the land in an effort to save your late mother’s bodega. In order to do so, you must communicate and form relationships with a variety of characters. Each with its own background and personality.

To form these relationships you must successfully complete conversations by using your deck and taking turns playing a card. Each card in your deck contains two symbols. In order to have a successful dialogue with an NPC, you need to match the symbol of the previous card. Failing to do so will result in the conversation breaking down.

As you explore more areas you will encounter new characters, new symbols, and new ways to communicate. Although your deck can only contain a limited number of cards. In order to successfully communicate with new people, you need to sacrifice the symbols of previous areas. 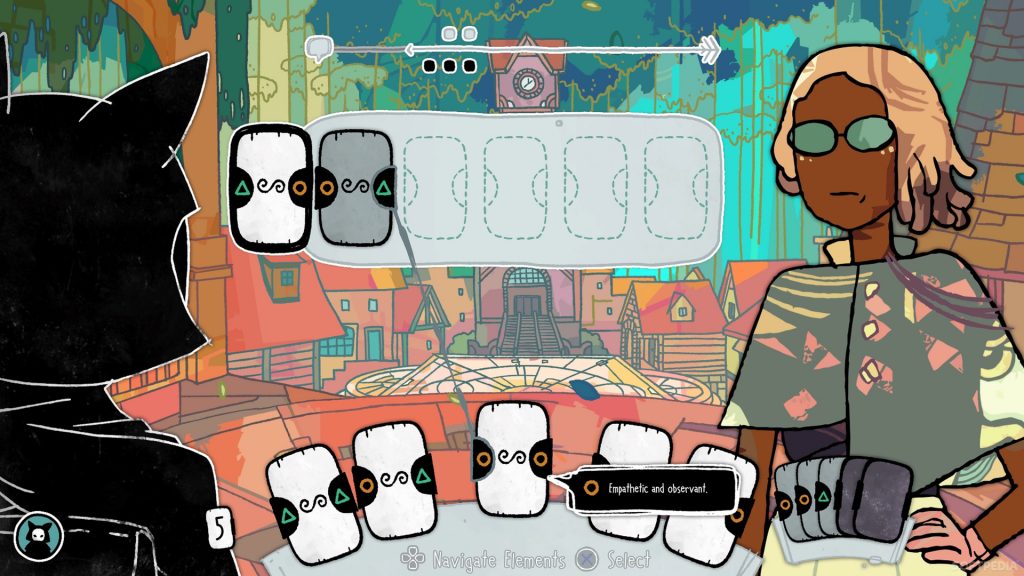 It is a system that does not outright state the intent to explore mental health. Instead, it allows the player to explore freely. To relate and come to terms with their own experiences, and to improve their understanding of others’.

From dealing with the grief of losing a loved one, the anxiety of moving out of your comfort zone and talking to new people, and the fear of isolation when falling out of touch with old friends and relatives. Signs of the Sojourner’s design allows the player to explore these themes and promotes understanding and healing in a way only video games can.

The Future of Mental Health in Video Games

The strides video games have made to explore and represent mental health in recent years have been a positive change. The majority of representation is still at a narrative level. However, developers are now successfully exploring avenues through game design too. Video games are truly a unique medium that have the potential to be one of the most powerful tools when it comes to mental health.

However, there are still plenty of steps that can be made to further improve the exploration in video games. From narratives to characters, to game design. The stigma of mental health is broken with each step the industry takes. In turn, this allows everyone to gain a greater understanding and empathy and creates a more comfortable environment for those suffering to open up and talk.