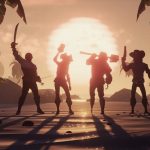 You are reading
Sea Of Thieves Hits 15 Million Player Milestone

Sea of Thieves has had quite the journey since its launch back in 2018. Originally released to lukewarm reception from critics and players. Rare took the criticism on the chin and began slowly addressing all of the criticisms. Now fast forward to 2020, and Sea of Thieves is possibly one of the most successful new IPs of the decade for Xbox.

In a new blog post by Joe Neate the executive producer of Sea of Thieves at Rare. He announced some amazing milestones for the game. Sea of Thieves has now officially hit 15 million players which is a massive milestone for the game. It had previously hit 10 million players only 6 months ago the growth of the game has been incredible. It was also revealed that the game has sold over 1 million copies on Steam since it launched in June of this year. This means in just over a month the game has sold a million copies. This month has been the biggest month ever for the game as more than 3.3 million players have set sail in the game this month. This is quite impressive, especially since the game is available on Xbox Game Pass for PC.

What do you think of these new milestones for Sea of Thieves? Let us know in the comments and don’t forget to check back for the latest gaming news and information.

Facebook Twitter Google+ LinkedIn Pinterest Tumblr
Previous article The Outer Worlds DLC Is Being Teased
Next article How Important is Halo: Infinite for Next Generation Xbox?