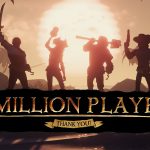 It has been a long road for Rare since the launch of Sea of Thieves back on March 20th, 2018. The game released to mediocre reviews citing the game in lacking enough content to justify the $60 price tag. Luckily enough, Sea of Thieves was one of the first games to launch in Xbox Game Pass. This gave the game time to find its legs, and like No Man’s Sky, Rainbow Six: Siege this game has found a whole new life thanks to continuous support from Rare. Today, Rare took to Twitter to announce that Sea of Thieves had officially reached 10 million unique players.

Join us in a toast to the 10 million pirates who have ventured onto the Sea of Thieves looking for adventure, glory and a tall tale or two to tell their mates! Cheers to every single one of you, and thank you for joining us on this voyage! 🍻 pic.twitter.com/xXdCKb3Gx7

This is a huge accomplishment for Rare especially considering Sea of Thieves is a brand new IP and is the studio’s first online-focused game. While personally, I was not a huge fan of of the game and am more of a fan of Rare’s past games. It is great to see the studio find a brand new audience that they have never reached before. So here’s to 10 million players, and the next round of grog is on Rare!

Were you one of the 10 million players to play Sea of Thieves? Let us know in the comments and don’t forget to check back for the latest gaming news and information.