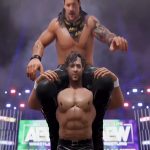 You are reading
AEW the Game: A Small Look Into a Big Contender

In the next few years, we can expect a slew of games to grace us.  Two of those games are WWE 2K22 and AEW Wrestling‘s console game. Today I will speak briefly about the latter, AEW which stands for All Elite Wrestling.

AEW is a newly formed pro-wrestling company that began on January 1st, 2019. This newly formed company has taken the wrestling scene by storm which I’ll dive into in a future article. Throughout the year we haven’t received much news about the game, but a few trailers which I am going to share with you. I am gonna show off the AEW official teaser trailer and two-character reveal trailers.

In this teaser trailer, we get to see some action from superstars such as Kenny Omega, Hikaru Shida, and even Chris Jericho.  AEW has partnered with former WWE 2K developer, Yukes. The develop has been in the business of making many wrestling games on multiple consoles. They even worked on WWF No Mercy which is a big fan favorite.

In the above trailer if you skip past the little teaser we get a brief look into Darby Allin’s character reveal. Darby is a wrestler that has no problem throwing caution to the wind and putting his body on the line to win. Being a popular former TNT champion, it’s not surprising that Darby was one of the first revealed for the upcoming AEW game.

In AEW, you can’t talk about popular without Jungle Boy’s name being mentioned. Even though Jungle Boy has a famous dad in Luke Perry, he has earned his own spotlight since his wrestling debut. This trailer gives us a small look into Jungle Boys moveset for the game.  He will definitely be a popular wrestler people will select.

Even though this was a more brief article I wanted to just give a short look into the game. I am hopeful for both WWE‘s and AEW‘s games respectively. Both titles are expected to release on Xbox and Playstation consoles. So if you enjoyed this or just looking forward to them then stay tuned.  I will be doing a WWE 2K22 versus AEW‘s game in the near future! So be on the lookout for that.