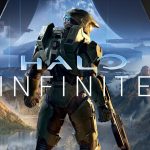 You are reading
Halo Infinite Will Take Your Breath Away

Halo Infinite was primed to be the center piece of this event since it was announced. 343 provided an extended gameplay demo that showcased some of the changes to the series. The sequence began with the forging of the Mjolnir Armor and the now familiar tagline ‘Become’.

Microsoft promised a game play demo,and a game play demo was delivered. The demo opened with a ship with Master Chief and the pilot from the debut trailer being shot down by enemies called “The Banished”.  This drops you on a brand new Halo ring like the first game.

The weapons and ship designs have received what looks to be quite the visual overhaul though the sounds and handling appear unchanged from the classic games. A minimap showcasing the objectives of destroying large cannons was used to nav the large open environments. The Covenant are back with Grunts, Brutes, and Elites showcased as well as new abilities like the heavily rumored grappling hook.

The Covenant have taken control of the Halo ring and something called the Auditorium. A monologue by Atriox laid out the stakes and called out Master Chief. Master Chief, of course, is more than ready to answer the call to battle. Halo Infinite is launching on Xbox Series X later this year.