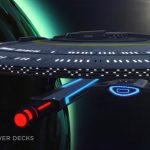 At long last, you can watch the season 1 trailer for Star Trek: Lower Decks – the upcoming animated comedy series which will be released in CBS All Access.

You can see the Star Trek: Lower Decks trailer for yourself below. Keep reading to find out when the show will be released. (Those of you from outside the United States may have trouble viewing the trailer.)

You will be able to watch the first season of Star Trek: Lower Decks in all of its glory on August 6th. CBS All Access will carry the show in the United States. It is unclear which service will host the series for other markets.

Unlike previous iterations of Star Trek which focused on the senior staff of a starship, Lower Decks takes a closer look at the lowest ranking crew. These misfits are the ones who are assigned the unpleasant tasks such as sanitizing the holodecks after use (blech!) and disposing of body parts from Sickbay. These four ensigns serve on the U.S.S. Cerritos which is quite possibly the most useless ship in all.pf Starfleet.

If the style of Star Trek: Lower Decks seems familiar, it may be due to the fact that the show was developed by Mike Mcmahan. One of the creative geniuses behind Rick and Morty.

While the show is first and foremost an animated comedy, you can still expect to see several classic elements of the franchise in Star Trek: Lower Decks. You may have noticed the Borg appearing in the trailer and you can bet the crew will wind up in all kinds of situations like temporal anomalies to Klingon attacks.

Do you think the new series will fit into the classic library of Star Trek shows? Will you watch the new animated show when it launches in August? Share your thoughts with us on Twitter or in the comment section below.