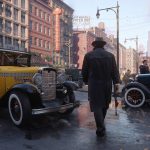 Mafia: Definitive Edition is a full-on remake of the 2002 classic. It just got a whole new slew of information from an extensive gameplay reveal video courtesy of IGN.

You can watch the video below or follow this link to watch the 14 minute-long gameplay reveal. The video is also available in full 4K resolution as well, which is a nice touch.

Mafia: Definitive Edition takes place during the US prohibition era. Developers, Hanger 13, wanted to accurately recreate the time period. They carefully studied and authentically recreate the vehicles, setting, and weapons during that specific part of history.

The developers wanted to leverage the latest game development technologies in order to bring the cult classic back for modern audiences while remaining true to the spirit and narrative of the game. In the video, Hanger 13 outlined how they recreated all of its cutscenes by making use of modern motion-capture technology. The remake will also revamp its textures, lighting, and other graphical assets to bring. In addition to that, the game’s core shooting and driving mechanics will also receive an overhaul while keeping its original mission design intact.

Mafia: Definitive Edition will launch on Xbox One, PlayStation 4, and PC on September 25, 2020. The game’s initial launch date was August 28. However, the coronavirus pandemic and lockdown measures pushed back the release by a month. Are you interested in the game? let us know in the comment section below.