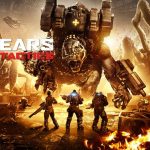 You are reading
Gears Tactics Has Appeared On The Xbox Store

Gears Tactics was the first official spin-off game in the Gears of War universe. The game was developed in partnership between Splash Damage and The Coalition. The game launched in April this year exclusively on PC, which led to disappointment from many Xbox One owners. As the game was not available to play or purchase on the Xbox One family of consoles. However, a new addition to the Xbox Store might point to a console release sooner rather than later.

Today, a Reddit user shared a screenshot showing off that a pre-load for Gears Tactics had appeared on the Xbox Games Store. With a store description stating that the game will be available later this year. The game is also listed and Xbox Series X enhanced, and most notably is an Xbox Play Anywhere title. This means PC players who bought the game via PC will also own a console version of the game. This is exciting for Gears fans that may not have had a PC in order to play the game. Gears Tactics smashes together the Gears of War universe with X-Com style strategy action. With a rumored event for Xbox in August, it feels like we might get an announcement for this game sooner than later. Here is hoping it is coming later this month.

Are you excited for Gears Tactics? Let us know in the comments and don’t forget to check back for the latest gaming news and information.