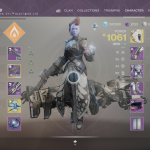 You are reading
Listen and Respect: A How To Guide to Female Streamers

Every so often, someone will go on social media and ask “where are the female content creators?”. I’m sure you’ve seen the posts; they usually start out “Hey, where are the female streamers at?” or “Looking for some good female-led podcasts. Anyone have suggestions?” What would then follow would be a chain letter of people tagging their favorite streamer or podcast. This article was going to be a list of all the cool “girl gamers” I follow who create awesome content and are generally great people. However, after the weekend of June 20-21, 2020, this article changed.

I will not address the victims or the abusers in this article, that is for someone with a better frame of mind than I have. What I will speak on, is that while you’re taking the time to look for female gamers, it’s important to also take the time to listen and respect us.

We are not asking for better treatment, just equal treatment. Show us the same respect that you would show your favorite male streamer or content creator. All that any woman, or any person for that matter, asks is for someone to listen and respect them. 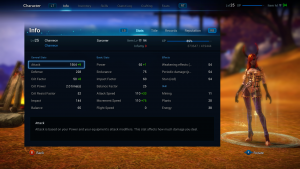 My character in Tera

When I say listen, I mean listen with the understanding that being friends with her will not lead to more. Paying attention to what we are saying is so much more than just listening to the words, though that’s a good start. Pay attention to the undertones, the volume. Just listen. If you can listen to your friend and tell that they are upset or indifferent from the tone of their voice, then for damn sure you can tell if someone is nervous or just flat out scared. Not every woman you interact with is here for your pleasure. When she tells you “No”, say “thank you” and walk away. If you get upset because a woman has told you “No”, that is not her problem. It is your problem, and it is a problem that needs to be corrected. Walk away. Female content creators already put a lot of themselves out there in the first place. Whether or not you are actually listening to us is something we don’t have time for. It is exhausting and worrying. 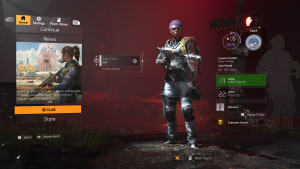 My character when the Warlords DLC drop.

When someone subscribes to a male-dominated channel or page, do they expect any extra treatment besides a shoutout from them? Or do you only expect women to “go the extra mile”? Supporting a female creator does not give you or anyone else any special access to anything she doesn’t want to give. Donating $5 to a stream does not give you the right to expect anything extra. 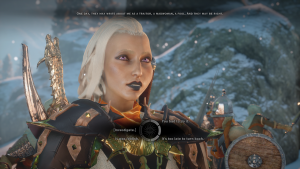 My character in Inquisition. A good game, not as good as 2 but still good.

By equal treatment, we want the same opportunities that male content creators are afforded without having to pander to certain people. We want to be judged on our actions, not by how we dress or look, and especially not by who we know. We put in just as much time and effort into our craft as any male streamer, and we would like to be recognized solely on our accomplishments. Some people think that when a female content creator asks for help or some guidance on how something works, they are supposed to do a little tit for tat. That’s not how it works. If you aren’t willing to help someone who is just reaching out, then you don’t need to speak up at all.

Also, don’t try to play one creator against the other in hopes that you receive better arrangements. Trust me, there are multiple text groups where women gamers are comparing notes on who is offering what and at what cost. Gaming has grown bigger, but it isn’t so big that if you are talking out of both sides of your mouth it won’t be noticed.

Respect the choices and decisions women have made for themselves. Don’t try and make some us second guess our choices by gaslighting us with your opinion. If a female content creator wants to be on camera in t-shirt and shorts and another one doesn’t even want to be on camera, respect both creators and don’t question their decisions. What YOU think she should be wearing doesn’t matter. It is her choice, not yours. Respect us enough to let us be comfortable in our own skin. If that content creator wants your opinion, she will ask you for it. Would you just give random fashion advice or otherwise, to your favorite male streamer without being asked? Show us that same respect.

Stop comparing us to the gamer girl memes.  We aren’t the eye candy know nothings here to game for male attention that those memes portray and it is insulting to think otherwise. Yes, it was funny many, many years ago. But that stereotype is wrong and played out. Today’s “gamer girl” is a kick-ass gamer who knows Geralt of Rivia is a beast at monster slaying while still enjoying the latest Mario Kart. The girl gamer myth is just that: a MYTH. And if you actually think that all female gamers are like that you, you need to spend a little less time with memes and a little more with actual female gamers.  Laugh at the meme, but respect the skill.

I almost started not to publish this because I KNEW some random dude was going to jump into my inbox and start some random mess about this. Bring it. Female content creators talk, and I would love to bring screenshots to the group.