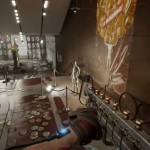 With all the next generation speculation it is likely that Atomic Heart has slid under your radar. The game is developed by the Russian Studio Mundfish and is self-published. Atomic Heart is set in an alternate universe during the “high noon” of the Soviet Union. A first-person action RPG experience crafted around survival and fighting to your last breath.

In a new 4k next-generation gameplay showcase of the game. We got our first look at how Atomic Heart will look on next-generation consoles. Not only this, is that during a climactic battle against a terrifying monster. You will find your ears quickly serenaded by the melodic tones of Mick Gordon, who is most famous for his works in games such as. Wolfenstein, Prey, and of course Doom (2016).  The blend of FPS action that draws influence from games like Prey, Metro, and Bioshock. The environments look incredible while the combat looks smooth and kinetic. The game is set to come to Xbox One, PlayStation 4, PC, Xbox Series X, and PS5. There is currently an RTX demo showcase that you can check out here.

Are you interested in Atomic Heart? Let us know in the comments and don’t forget to check back for the latest gaming news and information.