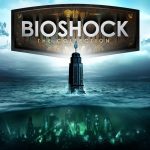 You are reading
BioShock Collection Listed For Nintendo Switch

Looks like you’ll be able to take Rapture on the go sometime soon on the Nintendo Switch.

From website LootPots, BioShock: The Collection is coming to the Nintendo Switch. While a launch date was not specified, the listed ratings from a Taiwanese games rating board reveal the collection is on the way to Nintendo’s platform:

See More: PlayStation Will Not Be Attending E3 2020 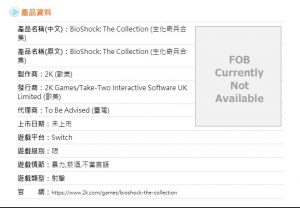 While not shown in the image, BioShock: The Collection for Nintendo Switch can include remastered versions of BioShock, BioShock 2, and BioShock Infinite. The unannounced collection mirrors the previously released package on PlayStation 4 and Xbox One. Additionally, ratings for each game were listed individually which could mean separate downloads for each title, according to LootPots.

An official announcement from 2K has yet to be made regarding the collection. No word on pricing or the storage size of the popular dystopian shooter. If true, the BioShock series will join Wolfenstein, Doom, and many other first-person shooters available on Nintendo Switch.

A New BioShock Is On The Way

The news comes sometime after 2K announced a new BioShock game is in development under newly formed studio Cloud Chamber.

“BioShock is one of the most beloved, critically praised and highest-rated franchises of the last console generation,” 2K President David Ismailer says. “We can’t wait to see where its powerful narrative and iconic, first-person shooter gameplay head in the future with our new studio team at Cloud Chamber leading the charge.”

The Lord’s Word: The more people that get to play the BioShock series, the better. I recently played the original BioShock and it still holds up to this day. Having the games remastered was already a win, but the possibility of having them on the go? Sounds too good to be true, but hopefully this leak has some truth to it.