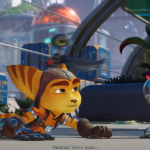 You are reading
Ratchet & Clank: Rift Apart Gets A New Gameplay Trailer

While both Xbox Series and PlayStation 5’s launch lineups are up in the air currently. There are a few games that have already stood out in terms of exciting next-generation experiences. One of these games of course was Ratchet and Clank: Rift Apart. The upcoming game from Insomniac Games has been a key showcase for the PlayStation 5 so far. The last gameplay trailer that showed our hero’s transitioning between many different worlds in real-time. It was a fantastic showcase of what the capabilities of the SSD could mean for next-generation consoles.

Today, during the opening night of Gamescom we got a brand new look at Ratchet and Clank: Rift Apart in action. In 7 minutes of brand new 4k gameplay, we got to see Ratchet and Clank team up and blow up some baddies. The game looks like a blend of modern aesthetics and classic gameplay that longtime fans of the franchise will enjoy. In an interesting piece of news, the games creative director Marcus Smith confirmed an interesting tidbit in an official PlayStation blog post. While many have speculated for a long time, we now know for sure that the game will be a launch window title. What does this mean? While the game might not make this upcoming holiday launch for PlayStation 5. However, it won’t be out that far after the release of PlayStation 5. This is exciting for longtime fans, and hopefully, we will hear more about upcoming launch titles in the coming weeks.

Are you excited for Ratchet & Clank: Rift Apart? Let us know in the comments and don’t forget to check back for the latest gaming news and information.